from AwareNow: Issue 13: The Heart Edition

The Letter That Led To Accessibility For All

Is it possible for a single letter to change an industry? Matthew Walzer’s letter did. In 2012, his now famous letter written to Nike, was opened, read and responded to - not only with acknowledgement but with action. Matthew wrote with a request for shoes he could put on by himself. Matthew has Cerebral Palsy. Now, as a result of his letter, he also has a pair of shoes he can put on with no assistance required.

Allié: With so much change needed to provide accessibility and equality for people with disabilities, most people don’t know where to start, but you did. You started with shoes. Your letter to Nike resulted in the development of the company’s first hands-free sneaker - Go FlyEase. Living with Cerebral Palsy, what does a shoe you can put on by yourself mean to you?

Matthew: When I first put shoes on independently at the age of 17, that moment was a culmination of all of the things that I struggled with in my life to that point. There was a time in my life where I wasn’t sure if that moment would happen. It truly gave me independence that I never had. I was able to go away to college at FGCU and thrive and get my degree. The first night in my life that I spent on my own was at freshman orientation, and that wouldn’t have been possible without shoes that I could put on independently. And to know that because of my letter. millions of other people with disabilities now can put a pair of shoes on without assistance, that means the world to me.

For the first time in my life at 17, I put my shoes on by myself.

Allié: You started with a letter to Nike for a better design. You continued on to work with them and became part of thatdesign, as you were involved in the process of what would ultimately result in the Go FlyEase. Tell us what thisexperience has been like for you and about your relationship with Tobie Hatfield.

Matthew: My collaboration with Nike was from 2012-2015 and resulted in the original Flyease shoe, the Lebron Zoom Soldier 8 Flyease. When I first talked to Tobie, he wanted to know what my needs were as it related to a shoe. I explained that aside from a lack of dexterity in my hands, I also have a lack of dorsiflexion and plantarflexion in my feet. Because of this, it’s difficult for me to get my foot down and into a shoe. Tobie presented me with a rear entry concept that allowed me to slide my foot in from the heel. From there, Nike would send me prototypes to try and I would give my feedback and insights on how the shoe could be improved when it came to materials, support, the length of the velcro straps and the cables, cushioning etc. While I didn’t work on the Go Flyease, It is terrific to see Nike expand on the Flyease line and this new shoe is going to continue to help so many people

Allié: Back in 2017, you were involved with the launch of Tommy Hilfiger’s Adaptive clothing line. Tell us about this lineand what Tommy Hilfiger did that you’d like to see other designers do as well.

Matthew: I actually met the former CEO of Tommy Hilfiger, Gary Sheinbaum, when I spoke at the White House in 2016 for the Design For All event. Later that year they reached out to me to model for the launch of the adaptive men’s line for Tommy Hilfiger in fall of 2017. The line features clothing with easy closure mechanisms such as magnetic buttons, velcro and more. I would especially love to see other companies produce adaptive swimwear that is both functional and cool looking. Being a Floridian, I’m at the beach and in the pool often, and yet finding a pair of board shorts that don’t need to be tied isn’t easy.

We need to see more universal design, not just in clothing, but everywhere.

Allié: From shoes to clothes there are a number of products that need to change to provide better accessibility.Beyond what you wear, can you share a few examples of other products where you’d like to see changes in design forpeople with disabilities?

Matthew: I look at the automobile industry in particular as an area I’d like to see some big changes in. You look at the hype around self driving cars and the luxury that they can provide. But what many people don’t necessarily realize is the benefits that this technology can provide for people with disabilities. I happened to be legally blind in one eye and this hinders my ability to drive at night. Other individuals might not to Be able to drive at all. I truly believe that Everyone should have the ability to enjoy the freedom and independence of getting to being able to get to where they need safely and independently.

Allié: Last year, you wrote a blog post entitled, ‘Together’, on your site ‘Against All Odds’. You spoke about how we’re all in this together and how we’re all on the same team. I want to reference this quote: “All of us play most of the same “games” in life, but people with disabilities typically have a much longer road to the title, making victory so much sweeter.” To date, what is your sweetest personal victory?

Matthew: My sweetest personal victory was going away to college at FGCU and living on my own and having a such an enjoyable college experience. There were some adjustments with making sure certain things were accessible for me, but through those experiences and that growth, as well as because of the amazing shoes that Nike gave me, I thrived. I graduated in four years in 2018 with a business management degree with a concentration in sports.

Allié: Many minority groups suffer from inequality. Matthew, as a member of the largest minority group in the world,people with disabilities, what is the biggest barrier we as a society need to overcome? What does a world of ‘inclusion’look like to you?

Matthew: To put it simply, for so long people with disabilities have been forced to adapt to the world. It’s time for theworld to start adapting to us, and understand and deliver on the changes that we want for a more inclusive world.Universal design for all!

Allié: We’ve heard all about what you’ve done so far. Love to hear what’s next for you.

Matthew: I’m hoping to get other companies on board with developing products that can serve everyone. We are so good at moving fast in the world of technology. If we are able to send a rover to Mars, then there is no reason why we can’t level the playing field of innovation and be more conscious of what it means to serve all people with disabilities. I can’t stress that enough. ∎ 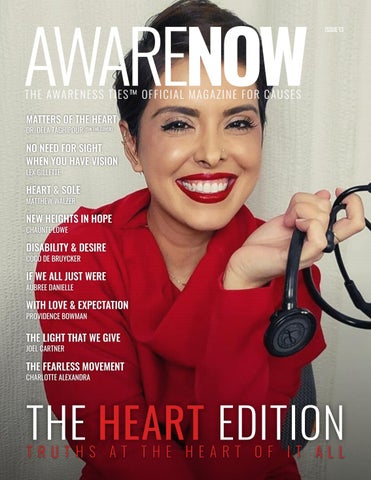