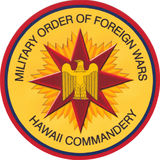 The Hawaii Commandery was organized April 2010, while the National Order was organized December 24, 1894 by Veterans of the War with Tripoli, and Mexican War, as well as descendants of Officer Veterans of the Revolutionary War, and the War of 1812. The Hawaii Commandery serves Hawaii's Active, Reserve, Retired, Veteran, and Cadet military communities.