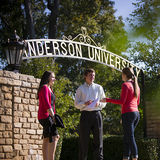 Just in case you think a single person can’t make a mighty difference in the world, meet Savannah Turner. This Anderson University alumna stepped out in faith to answer what felt like an overwhelming calling and is now using her education and passion to teach and care for the most vulnerable children in the Zambian city of Lusaka.

In 2013, when Turner was 17, she went to Zambia for three weeks. She had been on many mission trips before, but she never anticipated a trip having the life-changing impact this one did. She spent the first part of it doing evangelism work in the public schools of Lusaka. One night, she and the other volunteers attended a crusade to start a new church, during which she shared her blanket with about 20 young children, all of them gathering as close as they could to look at her and to stay warm. It was then that she knew she would be back.

Fast-forward two years. Turner was a sophomore at Anderson University studying elementary education. As a Teaching Fellow receiving a grant that helped fund her college career, she felt extremely blessed. But she hadn’t thought much about Zambia until a sermon one evening encouraged students to go and share their faith with the world.

28 | ALUMNI NEWS “I felt the Lord tug at my heart and remind me of Zambia,” she said. “I worried how that would change my life, and so I ignored Him.”

Later that year, Turner attended the Passion Conference in Atlanta, where she felt the calling again.

“I knew the Lord was asking me to go back to Zambia,” she said.

when their teachers are Anderson University grads. I want that experience for everyone. — Savannah Turner, AU alumna ”

That time the calling was too strong to ignore. She reached out to a friend in Lusaka, Rev. Bitwell Njovu, and asked if she could visit for the summer.

Njovu arranged for Turner to teach English in local community schools, poorly funded schools for orphans and disadvantaged children who can’t afford the uniforms and books required to attend public or private schools. By then she had already been exposed to US elementary school classrooms.

“Anderson University’s program got me in the classroom almost immediately, and by far the best experience you can have is real-life experience,” she said. That experience stood in stark contrast to the overfilled classrooms, underpaid and unmotivated teachers, and severe discipline methods she saw in Lusaka.

“Anderson University teaches you how to represent Jesus well, how to teach in light of His glory, and how to give kids the best education possible. My professors taught me how to keep my class kind, rigorous, and really fun,” she said. As she was teaching in Lusaka, it became clear why she’d been called there. “I was spurred on to love those kids and give them the kind of education students receive when their teachers are Anderson University grads. I want that experience for everyone,” she said.

At the end of that summer, Turner shared her dream of opening a school for orphans with Njovu, who told her he had the same dream. They started praying and planning.

A year later, in summer 2016, Turner went back to Lusaka for the third time to learn more about Zambia’s education system and what it would take to start a school. She had raised just $800 for the project and planned to only start laying the groundwork. But Njovu urged her to take a bold leap of faith and get started right then and there. Within three weeks, they had rented a building and begun renovating it. Soon they hired and trained teachers, and the Chikondi Community School was born. (In the Zambian language Nyanja, chikondi means love.)

While still attending Anderson University, Turner founded a nonprofit, Hands of Hope USA (handsofhopeus.com), to fund the school and provide clothing and healthy food to the students, now numbering over 130. The school is bursting at the seams, and her goal is to expand it to help even more children.

Turner graduated in 2018 and began teaching at Spearman Elementary School in Piedmont, South Carolina. When she’s not working what she lovingly calls her “full-time-anda-half” job, she’s fundraising, taking care of expenditures and budget reports and being a voice between Hands of Hope Zambia and Hands of Hope USA. She credits the Lord for being her “source and provider” in the face of all the responsibility.

Assistant Professor of Education Dr. Larry Knighton, Turner’s faculty advisor while at Anderson University, sees the passion she had as a student continuing in her teaching career.

“Our students are encouraged to share their witness wherever God places them. Savannah’s passion for children has led her to this new chapter in her life,” he said. “We often underestimate the influence a single individual can have, particularly in areas of the world where there is so much need. Thankfully, Savannah has not succumbed to the notion that individuals can do nothing.”