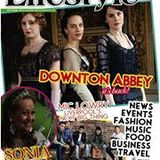 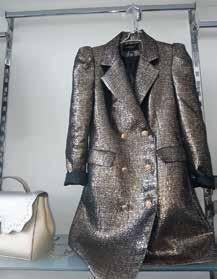 CELEBRITY HART TO HART US actor and comedian Kevin Hart coming to terms with a changing world.

10 T hey say every comedian needs a solid, varied slab of life experiences to be able in to reference in the name of writing good material; so in the case of Kevin Hart, he’s got plenty to help extend a career on stage that has already netted him the best part of £30million in career earnings. “I know they say money isn’t everything, but it’s sure as hell better than having no money… and I’ve been there,” he laughs. “The way I look at what I’ve earned from comedy, is basically it’s a fee I charge for people to laugh at how crap my life has been. And there’s a part of me that’s been undercharging!” Hart’s ascent to the top of the global comedy scene – segueing into the movie and record industries in the process – has certainly leant on a colourful upbringing. Included in that was his father’s cocaine addiction, visits to prisons where his elder inevitably ended up, the realities of being a single-parent child (raised by his mother, Nancy), and the pressures of dealing with a school life that, while rewarding – he went on to work at the University of Pennsylvania – was unconventional. “It’s perhaps a cliché to say that comedy saw me through those tough times, but I really think it did,” he says. ‘I think human nature sees us make one of a number of responses – that could be to laugh our way out of it, to become aggressive or angry, as has been a route for many successful sportspeople,

or to climb back into our shells. I wasn’t going to do the last one, so it was either comedy or basketball… and at 5ft 4” I wasn’t really in line for that one.” Hart scoffs, but fleeting appearances in celebrity basketball games actually revealed a latent talent that belied his stocky build. In stature, he couldn’t be further away from Dwayne Johnson, who he starred alongside in Jumanji: Welcome to the Jungle; yet proof that size isn’t everything came in the 40-year-old becoming the first comedian to partner with a major footwear and apparel company on

a cross-trainer. His Nike deal, and the creation of his Hustle Hart shoes, is supposed to point to the idea that everyday people can do incredible things in sport. “I think people are tired of seeing the same old stars doing amazing things with trainers and boots and all that,” says Hart. “When I was asked to launch my range in 2016 I thought I’d be moving away from that into the casual, leisure side of things – I was going to play it cool, man.” “Instead I found myself getting up at 6am going for runs. I found myself lifting weights and drinking a whole lot of protein. Then The Rock started call me for fitness advice…” he laughs. Hart elevated to the position of marathon runner, completing the New York marathon in a smidgeon over four hours. His journey from short funny guy to power-packed athlete was truly complete. “All jokes aside I wish I’d done more exercise when I was young,” he says. “I mean, I was fit; but the difference between being fit and being FIT is the difference between waking up okay and waking up truly happy. Health, just like laughter, is happiness.”

Whether owning it by pounding the pavements, spinning off a latest collection of thoughts and to entertain or abuse, or starring in any number of box office big-hitters, Hart has found peace in unexpected places. True, he has strayed off track in a drink-driving charge, and admits to have struggled with marriages. However, last year, a horrific car accident saw the comedian suffer multiple back fractures. At one point fearing he would never walk again, Hart’s gradual recovery is every bit that of a person, for once, not breaking into hysterical laughter. In a video released showing parts of his recovery, he said: “I honestly believe this was God’s way of saying ‘sit down – you’re moving too fast and you’re doing too much’.” Hart’s intense physical therapy includes weight training and pool workouts. It is a gruelling schedule that should get the star back, physically, to where he was. Mentally though, he will never be the same again. “After the accident, I see things from a whole new perspective. My appreciation for life is through the roof.” While humility isn’t necessarily a characteristic we’d apply to the Hollywood elite, it’s evidently a taught trait that Hart is regaining. “I had a lot of humility in my youth and I think as time goes on, as you get older, that can get lost along the way. It’s nice to get it back,” he smiles. The setback hasn’t stopped him ploughing on with thoughts of new film Fatherhood. With the release has been put back until January next year in the wake of Hart’s accident, the movie provides a time-sensitive angle for reflection – it is based on Matt Logelin’s Two Kisses for Maddy: A Memoir of Loss and Love, by far the most serious subject matter he has tackled so far. “Time to wise up?” he asks, “maybe a little. Time to stop moving forward? Never!”

This story is from:
Lifestyle Cyprus issue one/JUNE 2020
by Lifestyle Events Ltd