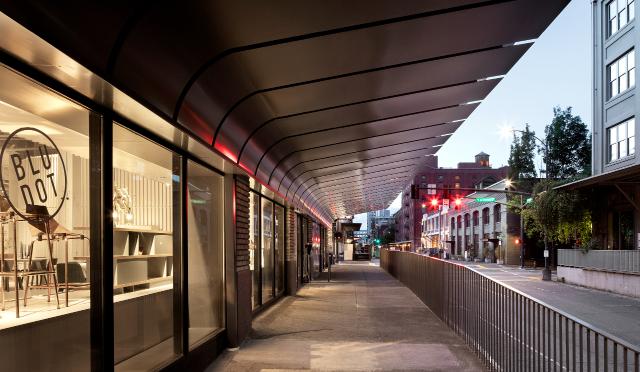 Since the postwar era, homeownership has provided the economic foundation for white, middle class America. At the same time, people of color and others of lesser means have been systematically excluded from the wealth building opportunities of homeownership. For several generations now, the segregation of owners and renters has fostered signifi cant economic disparity along racial and socioeconomic lines.

In recent decades, the high demand for housing has outpaced the existing supply in cities nationwide. The portion of society excluded from homeownership has expanded rapidly including not only a disproportionate number of people of color but also much of white middle class America itself. What began as exclusion ”by design” through overtly racist policies, exclusionary zoning, and redlining, is now exclusion “by default”. The single-family zoning regulations which blanket American cities, and which are still largely viewed as American as apple pie, have suppressed housing supply so dramatically that home prices are rapidly exceeding the buying power of the entire middle class.

Thankfully, Oregon is among the fi rst states beginning to change this trend. The passage of House Bill 2001 will soon re-legalize some of the “missing middle” housing types—duplexes and up to fourplexes—that traditionally supported more economically accessible and diverse neighborhoods. HB 2001 will fi nally allow more desperately needed housing to be built and this will at least help slow the price escalation of housing in general.

However, if the missing middle housing soon to be developed creates mostly new rental units and a few luxury condos - as is currently the case with infi ll development - the cost of property ownership will only rise faster. In this case, only the existing, largely white, property owners and property investment LLCs will have access to ownership in Oregon’s neighborhoods. On the other hand, just as postwar suburban homes opened doors of economic opportunity for an entire generation, so too can this newly developed infi ll housing open up substantial new equity opportunities for a wider spectrum of Oregonians. The key is to better enable individual ownership of these new dwelling units so that a fourplex can serve four residential owners rather than a single wealthy landlord. Better mechanisms for multiple resident ownership would allow communities to signifi cantly expand economic opportunities for the middle class, especially people of color.

Housing cooperatives offer an important opportunity here, and they have a rich history in America which demonstrate this point. Over 75% of New York City apartment buildings are cooperatively owned. Many were specifi cally established to enable low-income tenants to purchase their buildings. Housing cooperatives offer an ownership share to every household in a multi-unit property, dramatically reducing the cost barrier to ownership and increasing economic opportunities to underserved populations.

While condominiums provide another such ownership pathway, the roughly $25,000 expense of establishing this ownership structure is prohibitive for small developments with the exception of luxury housing. Housing cooperatives provide a much more affordable legal structure for multiple resident ownership requiring only a couple of standardized legal documents.

On the West Coast however, housing cooperatives are uncommon. Consequently, trying to fi nance the development of a co-op is a “chicken and the egg” problem. Applicable Fannie Mae co-op loans cannot be underwritten because there is no established market for them and this is because developers can’t access these lowinterest loans.

Yet such obstacles are currently being overcome in a few demonstration projects. SquareOne Villages in Eugene is utilizing housing co-ops in their “Village Model” whereby large parcels are developed into owner-occupied tiny house villages affordable to very-low-income households. My own company, Cultivate, Inc. is currently collaborating with SquareOne on the C Street Co-op, in Springfi eld, Oregon, and extending the “village model” to a single residential lot. The development is being fi nanced by local social investors and is currently in construction. Once complete, six very low-income households will cooperatively own a shared single-family house and ADU that has been designed with six private one-bedroom suites. Since HB 2001 is not yet in effect, a true multiplex was not possible.

The economics of the C Street Co-op are compelling. Subsidy amounts of $27,000 per household are achieving affordability by households earning 60% of the areamedian-income or AMI, around $34,000 per year. By comparison, conventional affordable housing projects in the area currently receive subsidies of over $250,000 per household; yet, deliver rental housing with a limited 20 year period of affordability. With total project costs of $99,000 per household, without any subsidy at all, ownership at C Street would be affordable to 80%-100% AMI households. The C Street Co-op demonstrates a signifi cant new pathway to offer a wider socio-economic spectrum of Oregonians an ownership stake in their neighborhoods. More details can be found at www.cultivateplace.com/c-street.

Better support of housing cooperatives, through more robust State co-op legislation for example, would provide critical leverage for HB 2001 to dramatically expand homeownership accessibility to a more diverse group of Oregonians. This would also go a long way toward reversing historic trends of racial exclusion and economic disparity. Indeed, access to better co-op fi nancing has the potential to bolster the economic stability of the entire American middle class.

I am hopeful that the Oregon architecture community will soon participate in an important new era of infi ll housing development as a result of HB 2001. I believe our participation will help ensure our neighborhoods grow in human-scaled, site-sensitive ways. I also hope that we will support the property owners and developers driving this work to consider housing cooperatives as a means to meet their bottom line while also expanding the equity opportunity of infi ll housing to a wider spectrum of Oregonians for generations to come.

If you’d like to stay informed on efforts to further enable housing cooperatives in Oregon, please email Dylan at: dylan@cultivateplace.com

Dylan Lamar, AIA, CHPC, is owner and director of Cultivate, Inc., a design and consulting fi rm located in Portland.

Previously known as the Portland Architecture Awards, the name was changed after the Oregon chapters merged into one chapter to form the Oregon Architecture Awards. In this juried awards program, all entrants have an equal chance for recognition, regardless of project scale, budget, type, or location.

This story is from:
AIA Oregon Design Annual - January 2021
by AIA Oregon