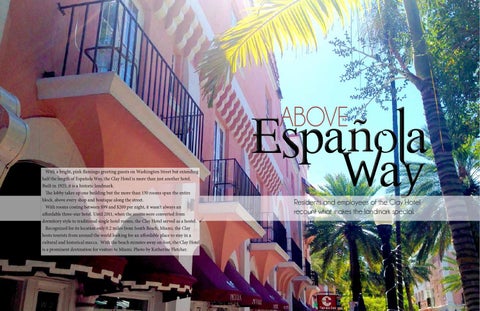 ABOVE With a bright, pink flamingo greeting guests on Washington Street but extending half the length of Española Way, the Clay Hotel is more than just another hotel. Built in 1925, it is a historic landmark. The lobby takes up one building but the more than 130 rooms span the entire block, above every shop and boutique along the street. With rooms costing between $99 and $200 per night, it wasn’t always an affordable three-star hotel. Until 2011, when the rooms were converted from dormitory style to traditional single hotel rooms, the Clay Hotel served as a hostel. Recognized for its location only 0.2 miles from South Beach, Miami, the Clay hosts tourists from around the world looking for an affordable place to stay in a cultural and historical mecca. With the beach minutes away on foot, the Clay Hotel is a prominent destination for visitors to Miami. Photo by Katherine Fletcher.

Residents and employees of the Clay Hotel recount what makes the landmark special. 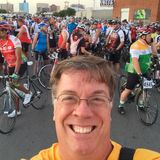 Our 21 students spent a day covering Española Way at South Beach in Miami. Then they created spreads, videos and engaged in social media. #m...

Our 21 students spent a day covering Española Way at South Beach in Miami. Then they created spreads, videos and engaged in social media. #m...