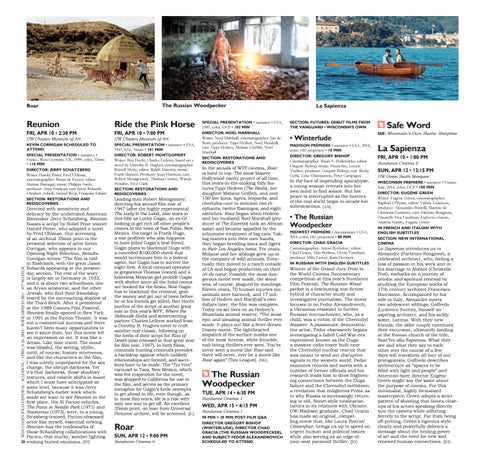 Directed with sensitivity and delicacy by the underrated American ﬁlmmaker erry Schat berg, Reunion boasts a script by obel ri e winner Harold inter, who adapted a novel by Fred hlman. Our screening of an archival 35mm print is the personal selection of actor Kevin orrigan, who appears in our Opening ight Selection, Results. orrigan writes he ﬁlm is told in ﬂashback, with the great ason obards appearing in the presentday section. he rest of the story is largely set in ermany in 1 , and it is about two schoolboys, one an ryan aristocrat, and the other ewish, who ﬁnd their friendship tested by the encroaching shadow of the hird eich. fter it premiered at the 1 annes Film Festival, Reunion ﬁnally opened in ew ork in 1 1 at the Sutton heater. t was not a commercial success and there haven’t been many opportunities to see it since then, but this movie left an impression on me. t was like a dream. ike time travel. he mood was blissful, the setting, idyllic, until, of course, history intervenes, and like the characters in the ﬁlm, was utterly unprepared for the sea change, the abrupt darkness. et it’s that darkness, those shadowy textures, and volatile shifts in mood which must have anticipated on some level, because it was erry Schat berg’s earlier work which made me want to see Reunion in the ﬁrst place. His l acino vehicles, The Panic in Needle Park 1 1 and Scarecrow 1 , were, to a young, Strasberg-trained, acino-obsessed actor like myself, essential viewing. Reunion has the trademarks of those Schat berg collaborations with acino, that murky, somber lighting 26 evoking buried emotions. (JH)

eading man obert ontgomery, directing his second ﬁlm noir of 1 after the highly experimental The Lady in the Lake , also stars in this ﬁlm as ucky agin, an exlooking to get rich off other people’s crimes in the town of San ablo, ew exico. His target is Frank Hugo, a war proﬁteer who also happens to have killed agin’s best friend. agin plans to blackmail Hugo with a cancelled 100,000 check that would incriminate him to a federal agent, but agin has to survive the night ﬁrst. local carousel operator a gregarious homas ome and a homeless exican girl provide agin with shelter since all the hotel rooms are booked for the ﬁesta. ow agin has to blackmail the criminal, grab the money and get out of town before he or his friends get killed. en Hecht author of the script of another great noir in this year’s WFF, Where the Sidewalk Ends and screenwriting partner harles ederer worked from a orothy . Hughes novel to craft another noir classic, following on the heels of their script for Kiss of Death also released in that great year for ﬁlm noir, 1 . n both ﬁlms, criminals hunting criminals provides a backdrop against which unlikely relationships are formed, and sacriﬁces have to be made. he io ivo carousel in aos, ew exico, which was the inspiration for the novel, was shipped to California for use in the ﬁlm, and serves as the primary metaphor for agin’s futile attempts to get ahead in life, even though, as in most ﬁlm noirs, life is a ride with only one way to get off. n excellent mm print, on loan from niversal ictures’ archive, will be screened. (JC)

n the annals of W F cinema, Roar is hard to top. he most bi arre Hollywood vanity pro ect of all time, this years-in-the-making folly features ippi Hedren The Birds , her daughter elanie rifﬁth, and over 1 0 live lions, tigers, leopards, and cheetahs—not to mention two elephants, twelve ﬂamingos, and eight ostriches. Roar began when Hedren and her husband oel arshall producer of The Exorcist took an frican safari and became appalled by the inhumane treatment of big cats. aking matters into their own hands, they began breeding lions and tigers in their Los Angeles home. For years, elanie and her siblings grew up in the company of wild animals. Eventually they moved to a ranch outside of and began production on their cri de coeur. Possibly the most dangerous movie ever made, the shoot was, of course, plagued by maulings. leven years, 0 human in uries no animals were harmed , and 1 million of Hedren and arshall’s own dollars later, the ﬁlm was complete. oday its set lives on as Hedren’s Shambala animal reserve. he most epic and ama ing animal thriller ever made. t plays out like a fever-dream isney movie. he lighthearted slapstick of the surface masks one of the most intense, white-knuckle, nail-biting thrillers ever seen. ou’ve never seen a movie like Roar and there will never, ever be a movie like Roar again im eague . (MK)

n the face of impending apocalypse, a young woman retreats into her own mind to ﬁnd solace. ut her peace is interrupted as the horrors of the real world begin to invade her subconscious. (AM)

IN RUSSIAN WITH ENGLISH SUBTITLES

Winner of the rand ury ri e in the World Cinema Documentary competition at this year’s Sundance Film Festival, The Russian Woodpecker is a fascinating non-ﬁction hybrid of character study and investigative ournalism. he movie focuses in on Fedor lexandrovich, a krainian resistant to further ussian encroachment, who, as a child, was a victim of the hernobyl disaster. passionate, demonstrative artist, Fedor obsessively begins investigating a failed old War-era experiment known as the uga a massive radio tower built near the Chernobyl nuclear reactor that was meant to send out disruptive signals to the western world. Fedor examines records and meets with a number of former ofﬁcials and his research leads him to draw frightening connections between the uga failure and the Chernobyl meltdown; a revelation that enlightens Fedor as to why ussia is increasingly returning to old, Soviet-style totalitarian tactics in its relations with kraine. W- adison graduate, had racia has made an original, compelling movie that, like aura oitras’ Citizenfour, brings us up to speed on urgent human and political issues while also serving as an edge-ofyour-seat paranoid thriller. (JH)

La Sapienza introduces us to lexandre Farbri io ongione , a celebrated architect, who, feeling a loss of passion in his work and in his marriage to li nor hristelle rot , embarks on a ourney of artistic and spiritual renewal by studying the uropean works of 1 th century architect Francesco orromini. ccompanied by his wife in taly, lexandre meets two adolescent siblings offredo udovico Succio , himself an aspiring architect, and his sickly sister, avinia. With their new friends, the older couple continues their excursion, ultimately landing at the oman church of the title, Sant’ vo alla Sapien a. What they see and what they say to each other over the course of a few days will transform all four of our protagonists. offredo describes architecture as spaces to be ﬁlled with light and people and merican-born director ug ne reen might say the same about the purpose of cinema. For this minimalist, highly formali ed masterpiece, reen adopts a strict pattern of shooting that favors closeups of his actors speaking directly into the camera while adhering ﬁercely to the script. Far from being off-putting, reen’s rigorous style clearly and powerfully delivers a message about the healing power of art and the need for new and renewed human connections. (JH)