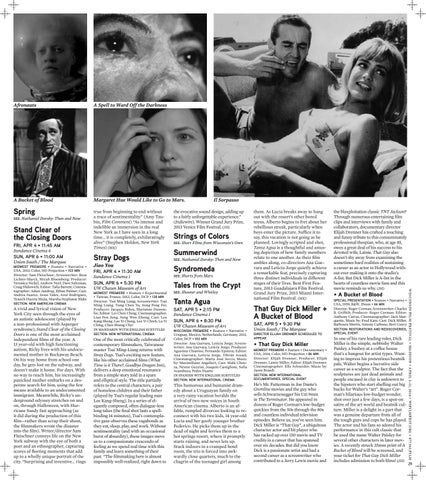 A Spell to Ward Off the Darkness

A Bucket of Blood

A vivid and lyrical vision of New York City seen through the eyes of an autistic adolescent (played by a non-professional with Asperger syndrome), Stand Clear of the Closing Doors is one of the most acclaimed independent films of the year. A 13 year-old with high functioning autism, Ricky lives with his undocumented mother in Rockaway Beach. On his way home from school one day, he gets lost on the subway, and doesn’t make it home. For days. With no way to reach him, his increasingly panicked mother embarks on a desperate search for him, using the few means available to an undocumented immigrant. Meanwhile, Ricky’s underground odyssey stretches on and on, through Halloween, with Hurricane Sandy fast approaching (as it did during the production of this film—rather than scrap their shoot, the filmmakers wrote the disaster into the film). Writer/director Sam Fleischner conveys life on the New York subway with the eye of both a poet and an ethnographer, capturing scores of fleeting moments that add up to a wholly unique portrait of the city. “Surprising and inventive… rings

Tales from the Crypt

One of the most critically celebrated of contemporary filmmakers, Taiwanese master Tsai Ming-Liang returns with Stray Dogs. Tsai’s exciting new feature, like his other acclaimed films (What Time is it There?, Goodbye Dragon Inn), delivers a deep emotional resonance from a simple story told in a spare and elliptical style. The title partially refers to the central characters, a pair of homeless children and their father (played by Tsai’s regular leading man Lee Kang-Sheng). In a series of elegantly composed, often dialogue-less long takes (the final shot lasts a spellbinding 14 minutes), Tsai’s contemplative gaze observes these vagabonds as they eat, sleep, play, and work. Without sentimentality (and with an occasional burst of absurdity), these images move us to a compassionate crescendo of feeling as we spend real time with this family and learn something of their past. “The filmmaking here is almost impossibly well-realized, right down to

This humorous and humanist dramedy about a Uruguayan family on a very rainy vacation heralds the arrival of two new voices in South American cinema. Alberto is an affable, rumpled divorcee looking to reconnect with his two kids, 14 year-old Lucia and her goofy younger brother Federico. He picks them up in the dead of night and ferries them to a hot springs resort, where it promptly starts raining, and never lets up. Stuck indoors in a cramped hotel room, the trio is forced into awkwardly close quarters, much to the chagrin of the teenaged girl among

them. As Lucia breaks away to hang out with the resort’s other bored teens, Alberto begins to fret about her rebellious streak, particularly when boys enter the picture. Suffice it to say, this vacation is not going as he planned. Lovingly scripted and shot, Tanta Agua is a thoughtful and amusing depiction of how family members relate to one another. As their film ambles along, co-directors Ana Guevara and Leticia Jorge quietly achieve a remarkable feat, precisely capturing three distinct individuals in different stages of their lives. Best First Feature, 2013 Guadalajara Film Festival. Grand Jury Prize, 2013 Miami International Film Festival. (MK)

He’s Mr. Futterman in Joe Dante’s Gremlins movies and the guy who sells Schwarzenegger his Uzi 9mm in The Terminator. He appeared in dozens of Roger Corman’s low-budget quickies from the 50s through the 80s and countless individual television episodes. Believe us, you’ve seen him. Dick Miller is “That Guy”, a ubiquitous character actor and bit player who has racked up over 150 movie and TV credits in a career that has spanned over six decades. But did you know Dick is a passionate artist and had a second career as a screenwriter who contributed to a Jerry Lewis movie and

the blaxploitation classic TNT Jackson? Through numerous entertaining film clips and interviews with family and collaborators, documentary director Elijah Drenner has crafted a touching and funny tribute to this consummately professional thespian, who, at age 85, owes a great deal of his success to his devoted wife, Lainie. That Guy also doesn’t shy away from examining the sometimes hard realities of sustaining a career as an actor in Hollywood without ever making it onto the studio’s A-list. But Dick Miller is A-list in the hearts of countless movie fans and this movie reminds us why. (JH)

• A Bucket of Blood

In one of his rare leading roles, Dick Miller is the simple, nebbishy Walter Paisley, a busboy at a coffee house that’s a hangout for artist types. Wanting to impress his pretentious beatnik pals, Walter begins a lucrative side career as a sculptor. The fact that the sculptures are just dead animals and people encased in clay is unknown to the hipsters who start shelling out big bucks for Walter’s “art”. Roger Corman’s hilarious low-budget wonder, shot over just a few days, is a spot-on satire of the art world and beatnik culture. Miller is a delight in a part that was a genuine departure from all of the tough guys and cops he has played. The actor and his fans so adored his performance in this cult classic that he used the name Walter Paisley for several other characters in later movies. A recently struck 35mm print of A Bucket of Blood will be screened, and your ticket for That Guy Dick Miller includes admission to both films! (JH)

true from beginning to end without a trace of sentimentality.” (Amy Taubin, Film Comment) “As intense and indelible an immersion in the real New York as I have seen in a long time… it is completely, exhilaratingly alive” (Stephen Holden, New York Times) (MK)