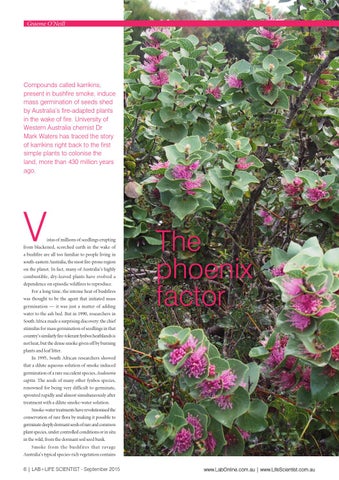 Compounds called karrikins, present in bushfire smoke, induce mass germination of seeds shed by Australia’s fire-adapted plants in the wake of fire. University of Western Australia chemist Dr Mark Waters has traced the story of karrikins right back to the first simple plants to colonise the land, more than 430 million years ago.

istas of millions of seedlings erupting

from blackened, scorched earth in the wake of a bushfire are all too familiar to people living in south-eastern Australia, the most fire-prone region on the planet. In fact, many of Australia’s highly combustible, dry-leaved plants have evolved a dependence on episodic wildfires to reproduce. For a long time, the intense heat of bushfires was thought to be the agent that initiated mass germination — it was just a matter of adding water to the ash bed. But in 1990, researchers in

South Africa made a surprising discovery: the chief stimulus for mass germination of seedlings in that country’s similarly fire-tolerant fynbos heathlands is not heat, but the dense smoke given off by burning plants and leaf litter. In 1995, South African researchers showed that a dilute aqueous solution of smoke induced germination of a rare succulent species, Audounia capita. The seeds of many other fynbos species, renowned for being very difficult to germinate, sprouted rapidly and almost simultaneously after treatment with a dilute smoke-water solution. Smoke-water treatments have revolutionised the conservation of rare flora by making it possible to germinate deeply dormant seeds of rare and common plant species, under controlled conditions or in situ in the wild, from the dormant soil seed bank. Smoke from the bushfires that ravage Australia’s typical species-rich vegetation contains