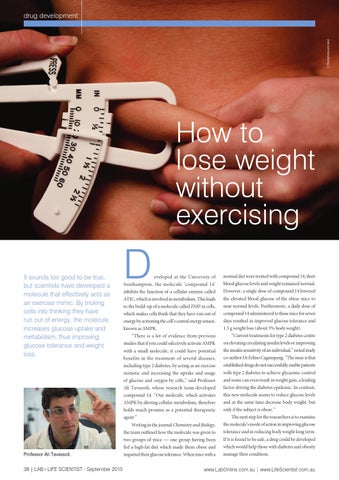 How to lose weight without exercising It sounds too good to be true, but scientists have developed a molecule that effectively acts as an exercise mimic. By tricking cells into thinking they have run out of energy, the molecule increases glucose uptake and metabolism, thus improving glucose tolerance and weight loss.

eveloped at the University of

normal diet were treated with compound 14, their

inhibits the function of a cellular enzyme called

However, a single dose of compound 14 lowered

ATIC, which is involved in metabolism. This leads

the elevated blood glucose of the obese mice to

to the build-up of a molecule called ZMP in cells,

near normal levels. Furthermore, a daily dose of

which makes cells think that they have run out of

compound 14 administered to these mice for seven

“There is a lot of evidence from previous

studies that if you could selectively activate AMPK

with a small molecule, it could have potential

the insulin sensitivity of an individual,” noted study

benefits in the treatment of several diseases,

co-author Dr Felino Cagampang. “The issue is that

including type 2 diabetes, by acting as an exercise

mimetic and increasing the uptake and usage

of glucose and oxygen by cells,” said Professor

and some can even result in weight gain, a leading

compound 14. “Our molecule, which activates

and at the same time decrease body weight, but

holds much promise as a potential therapeutic

only if the subject is obese.” The next step for the researchers is to examine

Writing in the journal Chemistry and Biology,

the molecule’s mode of action in improving glucose

the team outlined how the molecule was given to

two groups of mice — one group having been

If it is found to be safe, a drug could be developed

fed a high-fat diet which made them obese and

which would help those with diabetes and obesity

impaired their glucose tolerance. When mice with a