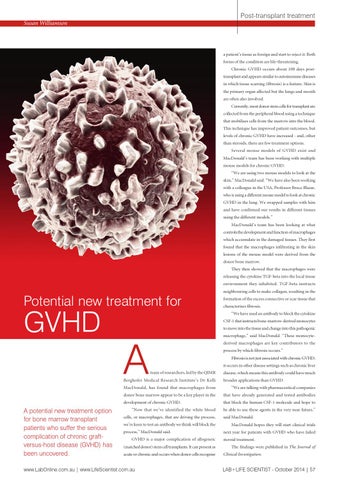 a patient’s tissue as foreign and start to reject it. Both forms of the condition are life-threatening. Chronic GVHD occurs about 100 days posttransplant and appears similar to autoimmune diseases in which tissue scarring (fibrosis) is a feature. Skin is the primary organ affected but the lungs and mouth are often also involved. Currently, most donor stem cells for transplant are collected from the peripheral blood using a technique that mobilises cells from the marrow into the blood. This technique has improved patient outcomes, but levels of chronic GVHD have increased - and, other than steroids, there are few treatment options. Several mouse models of GVHD exist and MacDonald’s team has been working with multiple mouse models for chronic GVHD. “We are using two mouse models to look at the skin,” MacDonald said. “We have also been working with a colleague in the USA, Professor Bruce Blazar, who is using a different mouse model to look at chronic GVHD in the lung. We swapped samples with him and have confirmed our results in different tissues using the different models.” MacDonald’s team has been looking at what controls the development and function of macrophages which accumulate in the damaged tissues. They first found that the macrophages infiltrating in the skin lesions of the mouse model were derived from the donor bone marrow. They then showed that the macrophages were releasing the cytokine TGF-beta into the local tissue environment they inhabited. TGF-beta instructs

formation of the excess connective or scar tissue that characterises fibrosis. “We have used an antibody to block the cytokine CSF-1 that instructs bone-marrow-derived monocytes to move into the tissue and change into this pathogenic

macrophage,” said MacDonald. “These monocytederived macrophages are key contributors to the process by which fibrosis occurs.” Fibrosis is not just associated with chronic GVHD; it occurs in other disease settings such as chronic liver team of researchers, led by the QIMR

A potential new treatment option for bone marrow transplant patients who suffer the serious complication of chronic graftversus-host disease (GVHD) has been uncovered.

neighbouring cells to make collagen, resulting in the

disease, which means this antibody could have much broader applications than GVHD.

MacDonald, has found that macrophages from

“We are talking with pharmaceutical companies

donor bone marrow appear to be a key player in the

that have already generated and tested antibodies

that block the human CSF-1 molecule and hope to

“Now that we’ve identified the white blood cells, or macrophages, that are driving the process, we’re keen to test an antibody we think will block the process,” MacDonald said. GVHD is a major complication of allogeneic (matched donor) stem cell transplants. It can present as acute or chronic and occurs when donor cells recognise

be able to use these agents in the very near future,” said MacDonald. MacDonald hopes they will start clinical trials next year for patients with GVHD who have failed steroid treatment. The findings were published in The Journal of Clinical Investigation.