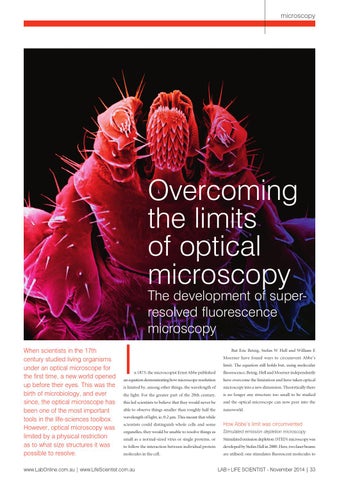 Overcoming the limits of optical microscopy When scientists in the 17th century studied living organisms under an optical microscope for the first time, a new world opened up before their eyes. This was the birth of microbiology, and ever since, the optical microscope has been one of the most important tools in the life-sciences toolbox. However, optical microscopy was limited by a physical restriction as to what size structures it was possible to resolve.

an equation demonstrating how microscope resolution

have overcome the limitation and have taken optical

is limited by, among other things, the wavelength of

microscopy into a new dimension. Theoretically there

the light. For the greater part of the 20th century,

is no longer any structure too small to be studied

this led scientists to believe that they would never be

and the optical microscope can now peer into the

able to observe things smaller than roughly half the

wavelength of light, ie, 0.2 µm. This meant that while scientists could distinguish whole cells and some

How Abbe’s limit was circumvented

organelles, they would be unable to resolve things as

small as a normal-sized virus or single proteins, or

molecules in the cell.

are utilised; one stimulates fluorescent molecules to