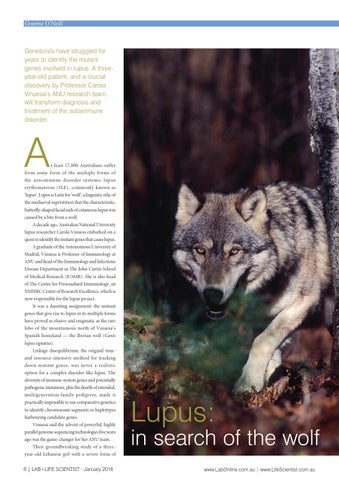 Geneticists have struggled for years to identify the mutant genes involved in lupus. A threeyear-old patient, and a crucial discovery by Professor Carola Vinuesa’s ANU research team, will transform diagnosis and treatment of the autoimmune disorder.

from some form of the multiple forms of the autoimmune disorder systemic lupus erythematosus (SLE), commonly known as ‘lupus’. Lupus is Latin for ‘wolf’, a linguistic relic of the mediaeval superstition that the characteristic, butterfly-shaped facial rash of cutaneous lupus was caused by a bite from a wolf. A decade ago, Australian National University lupus researcher Carola Vinuesa embarked on a quest to identify the mutant genes that cause lupus. A graduate of the Autonomous University of Madrid, Vinuesa is Professor of Immunology at ANU and head of the Immunology and Infectious Disease Department in The John Curtin School of Medical Research (JCSMR). She is also head of The Centre for Personalised Immunology, an NHMRC Centre of Research Excellence, which is now responsible for the lupus project. It was a daunting assignment: the mutant genes that give rise to lupus in its multiple forms have proved as elusive and enigmatic as the rare lobo of the mountainous north of Vinuesa’s Spanish homeland — the Iberian wolf (Canis lupus signatus). Linkage disequilibrium, the original timeand resource-intensive method for tracking down mutant genes, was never a realistic option for a complex disorder like lupus. The diversity of immune-system genes and potentially pathogenic mutations, plus the dearth of extended, multigeneration family pedigrees, made it practically impossible to use comparative genetics to identify chromosome segments or haplotypes harbouring candidate genes. Vinuesa said the advent of powerful, highly parallel genome sequencing technologies five years ago was the game-changer for her ANU team. Their groundbreaking study of a three-

in search of the wolf

year-old Lebanese girl with a severe form of