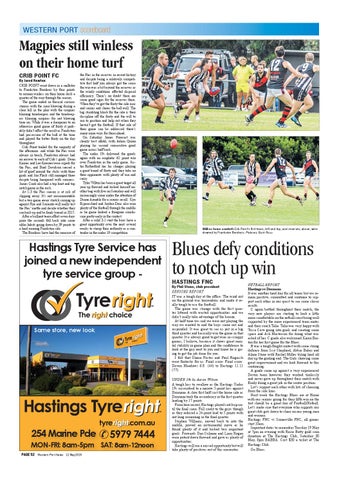 By Jared Newton CRIB POINT went down in a nailbiter to Frankston Bombers by four points to remain winless on their home deck a quarter of the way through the season. The game ended in farcical circumstances with the siren blowing during a clear lull in the play with the umpires blaming timekeepers and the timekeepers blaming umpires for not blowing time on. While it was a dampener to an otherwise good game of footy it probably didn’t affect the result as Frankston had possession of the ball at the time and played the better footy on the day throughout. Crib Point trailed for the majority of the afternoon and while the Pies were always in touch, Frankston always had an answer to each of Crib’s goals. Dean Kairies and Lee Koerner were superb for the Pies, and Brad Davidson caused a lot of grief around the sticks with three goals and Jon Flack still managed three despite being hampered with soreness. James Cook also had a top knot and top notch game in the ruck. At 1-3 the Pies season is at risk of slipping away. It’s not insurmountable but a two game away stretch coming up against Rye and Sorrento will really test the Pies’ mettle and decide whether they can back up and be finals bound in 2015. After a brilliant team effort seven days prior the seconds fell back into some older habits going down by 39 points to a hard running Frankston side. The Bombers have had the measure of

the Pies in the reserves in recent history and despite being a relatively competitive first half you always got the sense the win was a bit beyond the reserves as the windy conditions affected disposal efficiency. There’s no doubt there are some good signs for the reserves there. When they’ve got the footy the side runs and carries and shares the ball well. The big stumbling block for the side is their discipline off the footy and the will to run to position and help out when they haven’t got the football. If that side of their game can be addressed there’s many more wins for them ahead. On Saturday James Forecast was clearly best afield, with Adam Quinn playing his second consecutive good game across half back. The under 19s delivered the goods again with an emphatic 62 point win over Frankston in the early game. Justin Rutherford has his charges playing a great brand of footy and they take on their opponents with plenty of run and carry. Tyler Wilton has been a great target all year up forward and kicked himself another bag with five on Saturday and will increasingly come under the attention of Duane Annable for a seniors recall. Kye Espenschied and Jayden Deas also won plenty of the football through the middle as he game looked a foregone conclusion pretty early in the contest. After a solid 3-1 start the boys have a great opportunity over the next several weeks to stamp their authority as a contender in the under 19 competition.

By Phil Stone, club president SENIORS REPORT IT was a tough day at the office. The wind out on the ground was horrendous and made it really tough to use the football. The game was strange with the first quarter littered with wasted opportunities and we didn’t really take advantage of the breeze. At half-time we said we were not playing the way we wanted to and the boys come out and responded. It was great to see us put in a big third quarter and basically win the game in that quarter. It is always good to get wins in scrappy games, I believe, because it shows great mental stability in game plan and the confidence to look at the guy next to you and know he is going to get the job done for you. I felt that Shaun Foster and Paul Rogasch were fantastic for us. Final score: Final score: Devon Meadows 6.8 (44) to Hastings 11.11 (77). UNDER 19s by Aaron Wilson A tough loss to swallow as the Hastings Under 19s succumbed to a narrow 5-point loss against Dromana. A slow first half cost the home side as Dromana took the ascendency in the first quarter leading by 17 points. From here on out, Hastings played catch up until the final siren. Full credit to the guys though as they reduced a 24-point lead to 5 points with not long remaining in the final quarter. Stephen Williams, moved back to into the middle, proved an instrumental move as he found plenty of it and kicked two important goals. Forwards Dan Culnane and Liam Rogan were potent down forward and gave us plenty of opportunities. Hastings will rue a missed opportunity but will take plenty of positives out of this encounter.

NETBALL REPORT Hastings vs Dromana It was another hard day for all teams but we remain positive, committed and continue to support each other in our quest to see some closer results. C again battled throughout their match, the very new players are starting to look a little more comfortable on the netball court being well supported by the more experienced team mates and their coach Talia. Talia was very happy with Tessa Cave going into goals and creating some space and Ash Masterson for doing what was asked of her. C grade also welcomed Karen Barton for her first game for the Blues. B was a tough fought contest with some strong defence from Issy Shepherd, Abbie Baker and Alana Stone with Rachel Miller trying hard all day up the goaling end. The Girls showing some great improvement and we look forward to this continuing. A grade came up against a very experienced Devon team however they worked tirelessly and never gave up throughout their match with Emily doing a great job in the centre position. Let’s support each other with lots of cheering from the side lines. Next week the Hastings Blues are at Home with our seniors going for their fifth win on the trot should be a great day of Football/Netball. Let’s make sure that everyone who supports our great club gets down to cheer on our young men and women. Hastings FNC vs Somerville FNC, all games start 10am. Important dates to remember Tuesday 19 May at 7pm an evening with Rosie Batty gold coin donation at The Hastings Club, Saturday 30 May, 8pm BABBA. Cost $30 a ticket at The Hastings Club. Go Blues.