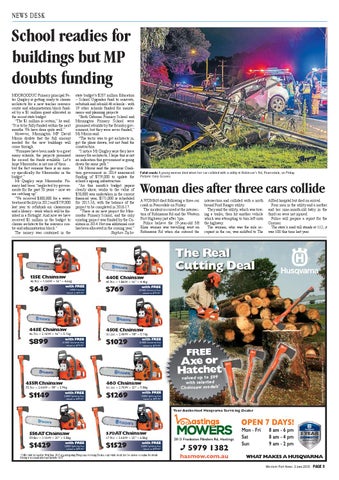 School readies for buildings but MP doubts funding MOOROODUC Primary principal Peter Quigley is getting ready to choose architects for a new teacher resource centre and administration block funded by a $1 million grant allocated in the recent state budget. “The $1 million is certain,” he said. “It is to be fully funded within the next months. We have done quite well.” However, Mornington MP David Morris doubts that the full amount needed for the new buildings will come through. “Promises have been made to a great many schools, the projects promised far exceed the funds available. Let’s hope Moorooduc is not one of them ... but the fact remains there is no money specifically for Moorooduc in the budget.” Mr Quigley says Moorooduc Primary had been “neglected by governments for the past 50 years – now we are catching up”. “We received $300,000 for a water treatment facility in 2012 and $759,000 last year to refurbish six classrooms and a library - work which will be finished in a fortnight. And now we have received $1 million in the budget to choose architects for the resource centre and administration block.” The money was contained in the

state budget’s $207 million Education – School Upgrades fund to renovate, refurbish and rebuild 46 schools - with 19 other schools funded for maintenance and planning projects. “Both Osborne Primary School and Mornington Primary School were promised rebuilds by the Brumby government, but they were never funded,” Mr Morris said. “The tactic was to get architects in, get the plans drawn, but not fund the construction. “I notice Mr Quigley says they have money for architects, I hope this is not an indication this government is going down the same path.” Mr Morris said the previous Coalition government in 2014 announced funding of $759,000 to update the school’s ageing infrastructure. “As this month’s budget papers clearly show, works to the value of $58,000 was undertaken in the current financial year, $571,000 is scheduled for 2015-16, with the balance of the project to be completed in 2016-17. “There is no new project for Moorooduc Primary School, and the only existing project was funded by the Coalition in 2014. Not one additional cent has been allocated in the coming year.” Stephen Taylor

Fatal crash: A young woman died when her car collided with a utility in Robinson’s Rd, Pearcedale, on Friday. Picture: Gary Sissons

Woman dies after three cars collide A WOMAN died following a three-car crash in Pearcedale on Friday. The incident occurred at the intersection of Robinsons Rd and the Western Port Highway just after 5pm. Police believe the 19-year-old Mt Eliza woman was travelling west on Robinsons Rd when she entered the

intersection and collided with a north bound Ford Ranger utility. They said the utility, which was towing a trailer, then hit another vehicle which was attempting to turn left onto the highway. The woman, who was the sole occupant in the car, was airlifted to The

Alfred hospital but died on arrival. Four men in the utility and a mother and her nine-month-old baby in the third car were not injured. Police will prepare a report for the Coroner. The state’s road toll stands at 112; it was 108 this time last year.

Images are for illustrational purposes only.

Axe or Hatchet valued up to $99 with selected * Chainsaw models