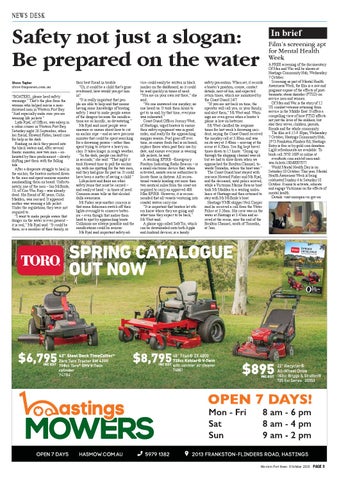 Safety not just a slogan: Be prepared on the water Steve Taylor steve@mpnews.com.au “BOATERS, please heed safety warnings.” That’s the plea from the woman who helped rescue a neardrowned man in Western Port Bay. “And especially make sure you are wearing life jackets.” Lyda Ryal, of Officer, was asleep in a cabin cruiser in Western Port Bay, Saturday night 26 September, when her friend, Howard Fisher, heard cries for help in the dark. Rushing on deck they peered into the black waters and, after several frantic minutes, saw two men – exhausted by their predicament – slowly drifting past them with the falling tide. After a desperate struggle to haul in the anchor, the boaters motored down to the men and spent anxious minutes manhandling them on board. Unfortunately, one of the men – Ian McBride, 53, of Koo Wee Rup – was already dead. His friend of 40 years, Colin Madden, was rescued. It appeared neither was wearing a life jacket. Under the regulations, they were not required to. “I want to make people aware that danger on the water is ever-present – it is real,” Ms Ryal said. “It could be them, or a member of their family, or

their best friend in trouble. “Or, it could be a child that’s gone overboard; how would you get him in? “It is really important that people are able to help and that means having some knowledge of boating safety. I want to make people aware of the dangers because the ramifications are so horrific, so devastating.” Ms Ryal said most people were unaware or unsure about how to cut an anchor rope – and so save precious minutes that could be spent searching for a drowning person – rather than spent trying to retrieve a heavy anchor. It takes longer in rough weather. “In the dark, people can drift by in seconds,” she said. “That night it took Howard time to pull the anchor up, with me spotting for the two men, and they had gone far past us. It could have been a matter of saving a child.” Lifejackets and flairs are other safety items that must be carried – and easily at hand – in times of need. Common sense tells us that alcohol dulls awareness. Mr Fisher says another concern is that some fishermen switch off their lights overnight to conserve batteries – even though that makes them hard to spot by approaching boats. Collisions are always possible and the ramifications could be serious. Ms Ryal said important safety ad-

vice could easily be written in black marker on the dashboard, so it could be read quickly in times of need. “You are on your own out there,” she said. “No one answered our mayday; no one heard us. It took them hours to get to us and, by that time, everyone was exhausted.” Coast Guard Officer Jeremy West, of Hastings, urged boaters to ensure their safety equipment was in good order, and ready for the approaching snapper season. Fuel goes off over time, so ensure fresh fuel is on board, replace flares when past their use-by date, and ensure everyone is wearing life jackets, he said. A working EPIRB –Emergency Position Indicating Radio Beacon – is a small electronic device that, when activated, assists rescue authorities to locate those in distress. All recreational vessels heading out more than two nautical miles from the coast are required to carry an approved 406 Mhz EPIRB. However, it is recommended that all vessels venturing into coastal waters carry one. “It is important that boaters let others know where they are going and what time they expect to be back,” Mr West said. A phone app called SafeTrx, which can be downloaded onto both Apple and Android devices, is a handy

safety precaution. When set, it records a boater’s position, course, contact details, next-of-kin, and expected return times, which are monitored by the Coast Guard 24/7. “If you are not back on time, the operator will call you, or your family, and alert them,” Mr West said. Warnings are even given when a boater’s phone is low on batteries. Mr West clarified the response times for last week’s drowning incident, saying the Coast Guard received the mayday call at 3.30am and was on its way at 3.40am – arriving at the scene at 4.20am. Sea fog kept travel times down to 15 knots. “Going up through the shipping channel was ok but we had to slow down when we approached the Boulton Channel, towards Tooradin, where the boat was.” The Coast Guard boat stayed with rescuers Howard Fisher and Ms Ryal, and the deceased, until police arrived, while a Victorian Marine Rescue boat took Mr Madden to a waiting ambulance at Hastings and then returned to stay with Mr McBride’s boat. Hastings VMR skipper Neil Cooper said he received a call from the Water Police at 3.26am. His crew was on the water at Hastings at 3.45am and arrived at the scene, near the end of the Boulton Channel, south of Tooradin, at 5am.

A FREE screening of the documentary Of Men and War will be shown at Hastings Community Hub, Wednesday 7 October. Screening as part of Mental Health Awareness Week, the film is a raw and poignant expose of the effects of posttraumatic stress disorder (PTSD) on service men and women. Of Men and War is the story of 12 US combat veterans returning from service in the Middle East. It offers a compelling view of how PTSD affects not just the lives of the soldiers, but also their wives, children, parents, friends and the whole community. The film is 6.15-9.30pm, Wednesday 7 October, Hastings Community Hub, 1973 Frankston-Flinders Rd, Hastings. Entry is free or by gold coin donation. Light refreshments are available. To book call 5950 1689 or online at eventbrite.com.au/e/of-men-andwar-tickets-18048007075 World Mental Health Day is on Saturday 10 October. This year, Mental Health Awareness Week is being celebrated Sunday 4 to Saturday 10 October. It aims to activate, educate and engage Victorians on the effects of mental health. Details: visit mornpen.vic.gov.au

ON RIDE ON MOWER SERIES See inside for details ‡ *