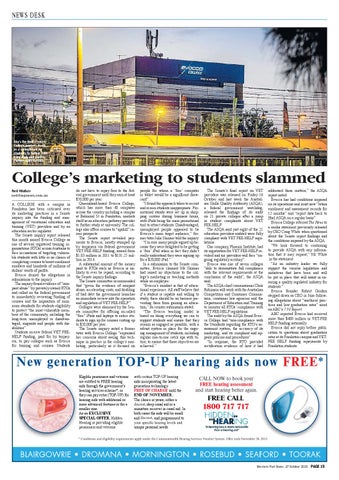 Sky’s the limit: Evocca College markets itself as a springboard for students to further their education and career. Picture: Gary Sissons

College’s marketing to students slammed Neil Walker neil@mpnews.com.au A COLLEGE with a campus in Frankston has been criticised over its marketing practices in a Senate inquiry into the funding and management of vocational education and training (VET) providers and by an education sector regulator. The Senate inquiry report released this month named Evocca College as one of several registered training organisations (RTOs) across Australia to face accusations of targeting vulnerable students with little or no chance of completing courses to boost enrolment numbers and hundreds of millions of dollars’ worth of profits. Evocca denied the allegations in submissions to the inquiry. The inquiry found evidence of “rampant abuse” by privately owned RTOs and called on the federal government to immediately reviewing funding of courses and the imposition of minimum standards for students eligibility to protect “the most vulnerable members of the community, including the long-term unemployed or disadvantaged, migrants and people with disabilities”. Students receive federal VET FEEHELP funding, paid for by taxpayers, to pay colleges such as Evocca for training and courses. Students

do not have to repay fees to the federal government until they earn at least $50,000 per year. Queensland-based Evocca College, which has more than 40 campuses across the country including a campus at Balmoral St in Frankston, markets itself as an education pathway provider to further study at university. The college also offers courses to “upskill” career prospects. The Senate report revealed payments to Evocca, mostly stumped up by taxpayers via federal government VET FEE-HELP funding, soared from $1.83 million in 2011 to $131.25 million in 2014. A substantial amount of the money paid to RTOs such as Evocca is unlikely to ever be repaid, according to the Senate inquiry findings. The Senate committee recommended that “given the evidence of rampant abuse, accelerating costs, and doubling of bad debt the government launches an immediate review into the operation and regulation of VET FEE-HELP.” Colleges were slammed by the Senate committee for offering so-called “free” iPads and laptops to entice students to sign up for courses costing up to $20,000 per year. The Senate inquiry noted a former tutor with Evocca College “expressed her concerns about seeing this technique in practice in the college’s marketing, particularly as it focused on

people for whom a ‘free’ computer or tablet would be a significant drawcard”. “I found the approach taken to recruit and screen students inappropriate. Promotional stands were set up in shopping centres during business hours, with iPads being the main promotional tool to attract students. Disadvantaged, unemployed people appeared to be Evocca’s main target audience,” former tutor Julie Skinner told the inquiry. “I’m sure many people signed up because they were delighted to be getting a ‘free’ iPad when in fact they didn’t really understand they were signing up for a $20,000 iPad.” In a submission to the Senate committee, Evocca claimed Ms Skinner had raised no objections to the college’s marketing or teaching methods while an employee. “Evocca’s mindset is that of educational experience. All staff believe that if a student is capable and willing to study, there should be no barriers preventing them from gaining an education,” its counter submission stated. “The Evocca teaching model is based on doing everything we can to support students and ensure that they remain as engaged as possible, with a robust system in place for the ongoing management of students, including regular one-to-one catch ups with tutors, to ensure that these objectives are achieved.”

The Senate’s final report on VET providers was released on Friday 16 October and last week the Australian Skills Quality Authority (ASQA), a federal government watchdog, released the findings of its audit on 21 private colleges after a jump in student complaints about VET FEE-HELP. The ASQA said just eight of the 21 education providers audited were fully compliant with VET FEE-HELP regulations. One company, Phoenix Institute, had its registration for VET FEE-HELP revoked and six providers will face “ongoing regulatory scrutiny”. Evocca was one of seven colleges “able to demonstrate full compliance with the relevant requirements at the conclusion of the audit”, the ASQA said. The ASQA chief commissioner Chris Robinson will work with the Australian Competition and Consumer Commission, consumer law agencies and the Department of Education and Training to monitor all RTOs’ compliance with VET FEE-HELP regulations. The audit by the ASQA found Evocca College had “non-compliance with the Standards regarding the RTO’s assessment system, the accuracy of its marketing, and its complaint and appeals policies and procedures”. “In response, the RTO provided rectification evidence of how it had

addressed these matters,” the ASQA report noted. Evocca has had conditions imposed on its operations and must now “retain enrolment and assessment records for 12 months” and “report data back to [the] ASQA on a regular basis”. Evocca College referred The News to a media statement previously released by CEO Craig White when questioned about the Senate report findings and the conditions imposed by the ASQA. “We look forward to continuing to provide ASQA with any information that it may request,” Mr White in the statement. “As an industry leader we fully support the various legislation and initiatives that have been and will be put in place that will assist in ensuring a quality regulated industry for students.” Evocca founder Robert Gordon stepped down as CEO in June following allegations about “unethical practices and low graduation rates” aired on ABC’s 7.30 Report. ABC reported Evocca had received more than $400 million in VET-FEE HELP funding nationally. Evocca did not reply before publication to questions about graduation rates at its Frankston campus and VETFEE HELP funding repayments by Frankston students.

with certain hearing needs to beTOP-UP experienced to be aids incorporating the islatest appreciated, which why we’re generation offering atechnology FREE TRIAL to the FREE OFpeople CHARGE until theto ¿rst 50 who respond NOVEMBER END SEPTEMBER. thisOF offer. Hear and enjoy the The choice isfor yours, eitherYou a will difference yourself. discreet, discrete deep canal aid or a be impressed. miniature receiver in canal aid. In As an EXCLUSIVE short term both cases theOFFER, aids will Hidden be small SPECIAL discreet, andHearing discrete, programmed is and providing eligibleto \RXUVSHFL¿FKHDULQJOHYHOVDQG pensioners and veterans unique personal needs.