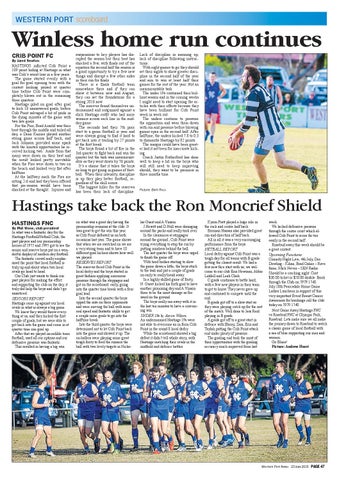 By Jared Newton HASTINGS inflicted Crib Point a 109 point hiding at Hastings in what was Crib’s worst loss in a few years. The game started evenly with a goal for goal opening term with the contest looking poised at quarter time before Crib Point were completely blown out in the remaining three quarters. Hastings piled on goal after goal to kick 18 unanswered goals, before Crib Point salvaged a bit of pride in the dying minutes of the game with two late goals. For the Pies, Brad Arnold was their best through the middle and toiled all day, a Dean Kairies played another strong game across half back, and Jack Johnson provided some spark with the limited opportunities he received kicking two. Aside from that many were down on their best and the result looked pretty inevitable when the Pies were down to two on the bench and looked very flat after halftime. At the halfway mark the Pies are sitting 2-6 and had they been offered that pre-season would have been shocked at the thought. Injuries and

suspensions to key players has disrupted the season but their best has shocked a few, with finals out of the equation the second half the season is a good opportunity to try a few new things and disrupt a few other sides in their run for finals. There is a finals football team somewhere there and if they can show it between now and August, they can set the foundations for a strong 2016 now. The reserves found themselves undermanned and outgunned against a slick Hastings outfit who had more winners across each line in the midday game. The seconds had their 7th poor start to a game football is year and were always going to find it hard to get back into it trailing by 27 points at the first break. The boys found a bit of fire in the 3rd quarter to fight back and win the quarter but the task was insurmountable as they went down by 76 points. It’s a shame that it takes the boys so long to get going in games of football. When their intensity, discipline is up they play better football, regardless of the skill errors. The biggest killer for the reserves has been their lack of discipline.

Lack of discipline in manning up, lack of discipline following instructions. With eight games to go they should set their sights to show greater discipline in the second half of the year and aim to win at least half their games for the rest of the year. Not an insurmountable task. The under 19s continued their brilliant season and in the coming weeks I might need to start opening the articles with their efforts because they have been brilliant for Crib Point week in week out. The unders continue to pressure the opposition and wear them down with run and pressure before blowing games open in the second half. After halftime, the unders kicked 7.8 to 0.3 to dismantle Hastings by 82 points. The margin could have been greater had it not been for inaccurate kicking. Coach Justin Rutherford has done well to keep a lid on the boys who will still need to keep improving should, they want to be premiers in three months time.

By Phil Stone, club president In what was a fantastic day for the Hastings Football/Netball Club, the past players and our premiership heroes of 1975 and 1995 got to see the senior and reserve boys put on a wonderful display of modern day football. The fantastic crowd really emphasised the point that local football is truly up and about when two local rivals go head to head. Our Club just wants to thank our past players for making the effort and supporting the club on the day, it truly did help the boys and didn’t go unnoticed. SENIORS REPORT Hastings came up against our local rivals in what is always a big game. We knew they would throw everything at us, and they kicked the first couple of goals, but we were able to get back into the game and come in at quarter time one goal up. After that we played incredible team football, used all our options and our defensive pressure was fantastic. This resulted in having a big win

on what was a great day having the premiership reunions at the club. It was great to get the win this year as Crib Point defeated us on both occasions last year. The game shows that when we are switched on we are a very strong team and to have 10 different goal kickers shows how well we played. RESERVES REPORT The reserves faced Crib Point in the local derby and the boys started in great fashion applying enormous pressure through the stoppages and got on the scoreboard early, going into the quarter time break with a four goal lead. Into the second quarter the boys upped the ante on there opponents and were moving the ball with some real speed and fantastic skills to get a couple more goals to go into the halftime break. Into the third quarter the boys were determined not to let Crib Point back into the game and slowed it up. The on-ballers were playing some great tough footy to feed the runners the ball with two lively targets in Nicho-

las Guest and A.Vinson. J.Hewitt and D.Hull were damaging around the packs and really took over. In the clearances at stoppages around the ground , Crib Point were trying everything to stop the run by putting numbers behind the ball. The last quarter the boys were urged to finish the game off. With tired bodies starting to slow the game down a little, the boys stuck to the task and put a couple of goals on early to really break away. In a highly skilled game of footy, N. Guest kicked his forth goal to have another promising day and A.Vinson three to be the most damage as forward on the ground. The boys really ran away with it in the last ten minutes to have a convincing win UNDER 19s by Aaron Wilson An undermanned Hastings 19s were not able to overcome an in-form Crib Point in the round 8 local derby. While the scoreboard showed a big defeat it didn’t tell whole story, with Hastings matching their rivals in the midfield and defence battles.

Kyron Pratt played a huge role in the ruck and centre half back. Brennan Hassan also provided great run and direction of half back. All in all it was a very encouraging performance from the boys. NETBALL REPORT Local derby against Crib Point was a tough day for all teams with B grade getting the closest result. We had a few new face start with us; we welcome to our club Erin Newman, Abbie Liddell and Leah Clark. C grade continues to battle hard, with a few new players in their team to get to know. They never gave up and continued to compete until the end. B grade got off to a slow start so they were playing catch up for the rest of the match. Well done to Jess Reid playing in B grade. A grade got off to a great start in defence with Ebony, Zara, Erin and Taylah putting the Crib Point attack end under plenty of pressure. The goaling end took the most of their opportunities with the goaling accuracy much improved from last

week. We lacked defensive pressure through the centre court which allowed Crib Point to score far too easily in the second half. Rosebud away this week should be a great contest. Upcoming Functions Comedy Night Live, 4th July, Des Dowling - Kihne, Brad Oakes – Rove fame, Mick Neven – SEN Radio. Should be a cracking night. Cost $30.00 ticket or $50.00 double. Book through the Club on 5979 1740. July 18th Pearcedale Home Game Ladies Luncheon in support of this very important Event Breast Cancer Awareness for bookings call the club today on 5979 1740. Next Game Away Hastings FNC vs Rosebud FNC at Olympic Park, Rosebud. Lets make sure we all make the journey down to Rosebud to watch a classic game of local football with a sea of blue supporting our men and women. Go Blues! Picture: Andrew Hurst