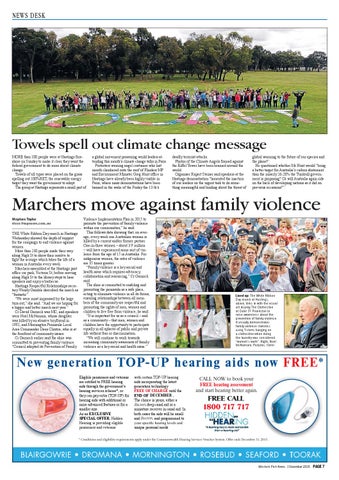 a global movement pressuring world leaders attending this month’s climate change talks in Paris. Protesters wearing angel costumes who last month clambered onto the roof of Flinders MP and Environment Minister Greg Hunt office in Hastings have already been highly visible in Paris, where mass demonstrations have been banned in the wake of the Friday the 13 th’s

deadly terrorist attacks. Photos of the Climate Angels framed against the Eiffel Tower have been beamed around the world. Organiser Rupert Steiner said speakers at the Hastings demonstration “lamented the inaction of our leaders on the urgent task to do something meaningful and binding about the threat of

global warming to the future of our species and the planet”. He questioned whether Mr Hunt would “bring a better target for Australia’s carbon abatement than the miserly 26-28% the Turnbull government is proposing? Or will Australia again ride on the back of developing nations as it did on previous occasions?”.

Marchers move against family violence Stephen Taylor steve@mpnews.com.au THE White Ribbon Day march in Hastings Wednesday showed the depth of support for the campaign to end violence against women. More than 230 people made their way along High St to show their resolve to fight the scourge which takes the life of a woman in Australia every week. Marchers assembled at the Hastings post office car park, Victoria St, before moving along High St to the library steps to hear speakers and enjoy a barbecue. Hastings Respectful Relationships secretary Wendy Gamble described the march as “fantastic”. “We were most impressed by the large turn-out,” she said. “And we are hoping for a bigger and better march next year.” Cr David Garnock was MC, and speakers were Noel McNamara, whose daughter was killed by an abusive boyfriend in 1992, and Mornington Peninsula Local Area Commander Dean Clinton, who is at the forefront of community issues. Cr Garnock earlier said the shire was committed to preventing family violence. “Council adopted its Prevention of Family

Violence Implementation Plan in 2015 to promote the prevention of family violence within our communities,” he said. This follows data showing that, on average, every week one Australian woman is killed by a current and/or former partner. One-in-three women – about 3.9 million – will have experienced some sort of violence from the age of 15 in Australia. For indigenous women, the rates of violence are 35 times greater. “Family violence is a key social and health issue which requires advocacy, collaboration and resourcing,” Cr Garnock said. The shire is committed to enabling and promoting the peninsula as a safe place, acting to eliminate violence in all its forms, ensuring relationships between all members of the community are respectful and promoting the rights of men, women and children to live free from violence, he said. “It is important for us as a council – and as a community – that men, women and children have the opportunity to participate equally in all spheres of public and private life without fear or discrimination. “We will continue to work towards increasing community awareness of family violence as a key social and health issue.”

Lined up: The White Ribbon Day march at Hastings, above, links in with the visual art display The Clothesline at Cube 37 Frankston to raise awareness about the prevention of family violence. It visually demonstrates family violence statistics using T-shirts hanging on a clothesline when doing the laundry was considered “women’s work”. Right, Noel McNamara. Pictures: Yanni

with certain hearing needs to beTOP-UP experienced to be aids incorporating the appreciated, which islatest why we’re generation offering atechnology FREE TRIAL to the FREE OFpeople CHARGE until theto ¿rst 50 who respond DECEMBER END OF SEPTEMBER. this offer. Hear and enjoy the The choice isfor yours, eitherYou a will difference yourself. discreet, discrete deep canal aid or a be impressed. miniature receiver in canal aid. In As an EXCLUSIVE short term both cases theOFFER, aids will Hidden be small SPECIAL discreet, andHearing discrete, programmed is and providing eligibleto \RXUVSHFL¿FKHDULQJOHYHOVDQG pensioners and veterans unique personal needs.