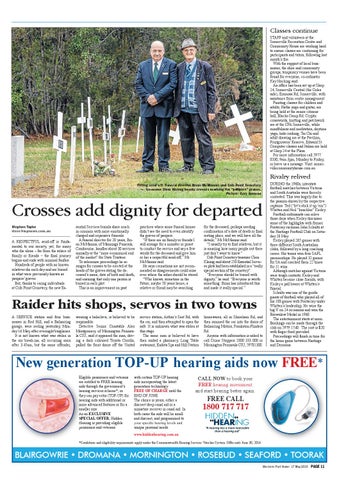 Classes continue STAFF and volunteers at the Somerville Recreation Centre and Community House are working hard to ensure classes are continuing for participants and tutors, following last monthâ&#x20AC;&#x2122;s fire. With the support of local businesses, the shire and community groups, temporary venues have been found for everyone, co-ordinator Kay Hocking said. An office has been set up at Shop 24, Somerville Central (the Coles side), Eramosa Rd, Somerville, with assistance from centre management. Painting classes for children and adults, Hatha yoga and guitar, are being held at the senior citizens hall, Blacks Camp Rd. Cryptic crosswords, knitting and patchwork are at the CFA Somerville, while mindfulness and meditation, daytime yoga, kids cooking, Tai Chi and adult drawing are at the Pavilion, Fruitgrowersâ&#x20AC;&#x2122; Reserve, Edward St. Computer classes and Italian are held at Shop 24 at the Plaza. For more information call 5977 8330, 9am-3pm, Monday to Friday, or leave us a message. Visit: somervillecommunityhouse.com.au

Crosses add dignity for departed Stephen Taylor steve@mpnews.com.au A RESPECTFUL send-off is fundamental to our society, yet, for many who die alone â&#x20AC;&#x201C; far from the solace of family or friends â&#x20AC;&#x201C; the final journey begins and ends with minimal fanfare. Hundreds of people with no known relatives die each day and are buried in what were previously known as paupersâ&#x20AC;&#x2122; graves. But, thanks to caring individuals at Crib Point Cemetery, the new Es-

sential Services burials share much in common with more emotionally charged and expensive funerals. A funeral director for 20 years, Brian McMannis, of Mannings Funerals, Cranbourne, handles about 30 services annually at the â&#x20AC;&#x153;more economical end of the marketâ&#x20AC;? for State Trustees. To solemnise proceedings he arranges for crosses to be erected at the heads of the graves stating the deceasedâ&#x20AC;&#x2122;s name, date of birth and death, and ensuring that only one person is buried in each plot. This is an improvement on past

practices where some funeral homes didnâ&#x20AC;&#x2122;t see the need to even identify the graves of paupers. â&#x20AC;&#x153;If there are no family or friends I will arrange for a minister or priest to conduct the service and say a few words for the deceased and give him or her a respectful send-off,â&#x20AC;? Mr McMannis said. He says cremations are not recommended as disagreements could arise over where the ashes should be stored. â&#x20AC;&#x153;Who knows, sometime in the future, maybe 50 years hence, a relative or friend may be searching

Raider hits shops, servos in two towns A SERVICE station and four businesses in Red Hill, and a Balnarring garage, were reeling yesterday, Monday 16 May, after overnight burglaries. It is not known what was stolen in the six break-ins, all occurring soon after 3.45am, but the same offender,

wearing a balaclava, is believed to be responsible. Detective Senior Constable Alex Montgomery, of Mornington Peninsula CIU, said it appeared the man, driving a dark coloured Toyota Corolla, pulled the front doors off the United

service station, Arthurâ&#x20AC;&#x2122;s Seat Rd, with the car, and then attempted to open the safe. It is unknown what was stolen at this stage. The same man is believed to have then raided a pharmacy, Long Table restaurant, Endota Spa and Hill Station

homewares, all in Shoreham Rd, and then rammed the car into the doors of Balnarring Motors, Frankston-Flinders Rd. Anyone with information is asked to call Crime Stoppers 1800 333 000 or Mornington Peninsula CIU, 59781300.

DURING the 1960s, interstate football matches between Victoria and South Australia were fiercely contested. This was largely due to the passion shown by the respective captains: Ted (â&#x20AC;&#x153;letâ&#x20AC;&#x2122;s stick it up â&#x20AC;&#x2DC;emâ&#x20AC;?) Whitten and Neil â&#x20AC;&#x153;knucklesâ&#x20AC;? Kerley. Football enthusiasts can relive those days when Kerley discusses some of the highlights with former Footscray ruckman John Schultz at the Hastings Football Club on Saturday 28 May. Kerley played 265 games with three different South Australian clubs, followed by a long coaching career. His teams won four SAFL premierships. He played 32 games for SA and coached them 22 times for 11 wins. Although matches against Victoria were tough contests, Kerley and Whitten became close friends, with Kerley a pall bearer at Whittenâ&#x20AC;&#x2122;s funeral. Schultz was one of the gentle giants of football who played all of his 188 games with Footscray under Whittenâ&#x20AC;&#x2122;s leadership. He wore the big V on 24 occasions and won the Brownlow Medal in 1960. The entertainment starts at noon. Bookings can be made through the club on 5979 1740. The cost is $20 with finger food provided. Proceedings will finish in time for the home game between Hastings and Dromana.

with certain TOP-UP hearing aids incorporating the latest generation technology FREE OF CHARGE until the END OF JUNE The choice is yours, either a discreet deep canal aid or a miniature receiver in canal aid. In both cases the aids will be small and discreet, and programmed to \RXUVSHFLÂżFKHDULQJOHYHOVDQG unique personal needs. www.hiddenhearing.com.au