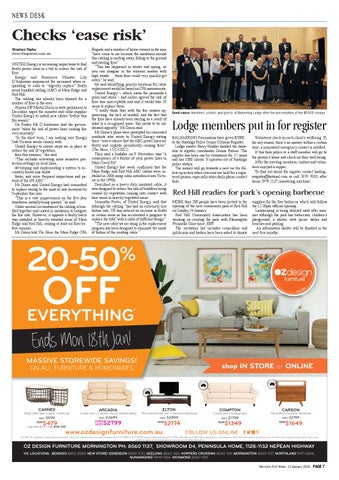 Checks ‘ease risk’ Stephen Taylor steve@mpnews.com.au UNITED Energy is increasing inspections to find faulty power lines in a bid to reduce the risk of fires. Energy and Resources Minister Lily D’Ambrosio announced the increased when responding to calls to “urgently replace” faulty aerial bundled cabling (ABC) at Main Ridge and Red Hill. The cabling has already been blamed for a number of fires in the area. Nepean MP Martin Dixon in state parliament in December urged the minister and cable supplier United Energy to install new cables “before this fire season”. On Friday Ms D’Ambrosio said the government “takes the risk of power lines causing fire very seriously”. “In the short term, I am making sure Energy Safe Victoria works closely with United Energy to ensure steps are in place to reduce the risk of vegetation fires this summer,” she said. “This includes activating more sensitive protection settings on local lines, developing and implementing a system to accurately locate line faults faster, and more frequent inspections and patrols of the HV ABC.” Mr Dixon said United Energy had committed to replace wiring to the most at risk locations by September this year. “This is a vast improvement on the five-year timeframe initially being quoted,” he said. Under normal circumstances the cabling is bundled together and coated in insulation to mitigate the fire risk. However, it appears a faulty batch was installed in heavily wooded areas of Main Ridge and Red Hill, causing at least six fires before summer. Mr Dixon told The News the Main Ridge CFA

Brigade and a number of home owners in the area “have come to me because the insulation around this cabling is melting away, falling to the ground and starting fires”. “This has happened in winter and spring, so you can imagine in the summer season with high winds … those fires could very quickly get away,” he said. He said identifying priority locations for cable replacement would be based on CFA assessments. United Energy – which owns the peninsula’s poles and wires – had earlier agreed the risk of fires was unacceptable and said it would take 10 years to replace them. “I really think that with the fire season approaching, the lack of rainfall, and the fact that the fires have already been starting as a result of what is a recognised issue, this needs to be addressed urgently,” Mr Dixon said. Mr Dixon’s pleas were prompted by concerned residents who wrote to United Energy stating there “was evidence that the ABC power lines are faulty and explode periodically causing fires”. (The News, 15/12/2015). They said a bushfire on 9 November was “a consequence of a failure of your power lines in Main Creek Rd”. United Energy last week confirmed that the Main Ridge and Red Hill ABC cables were installed in 2006 using cable introduced into Victoria in the 1990s. Described as a heavy duty insulated cable, it was designed to reduce the risk of bushfires being caused by vegetation coming into contact with bare wires in heavily vegetated areas. Samantha Porter, of United Energy, said that although the cabling “has had an extremely low failure rate, UE has noticed an increase in faults in certain areas so has accelerated a program to replace the ABC with a cable of different design”. “The new cable we are using in the replacement program has been designed to eliminate the mode of failure of the existing cable.”

Good cause: Members, visitors and guests of Balnarring Lodge after the presentation of the $5000 cheque.

Lodge members put in for register BALNARRING Freemasons have given $5000 to the Hastings Police Senior Citizens Register. Lodge master Barry Hodder handed the donation to register coordinator Denise Palmer. The register has been run by volunteers for 15 years and has 1000 clients. It operates out of Hastings police station. The money will go towards a new car for follow-up action when concerns are held for a registered person, especially when daily phone contact fails.

Volunteers check on each client’s wellbeing. If, for any reason, there’s no answer within a certain time, a nominated emergency contact is notified. If this fails police or a staff member will go to the person’s home and check on their well-being. After the meeting members, visitors and volunteers enjoyed a supper. To find out about the register contact hastingsregister@hotmail.com or call 5979 7033; after hours 5979 2137 (answering machine).

Red Hill readies for park’s opening barbecue MORE than 200 people have been invited to the opening of the new community park at Red Hill on Sunday 24 January. Red Hill Community Association has been working on creating the park with Mornington Peninsula Shire since 2009. The invitation list includes councillors and politicians and traders have been asked to donate

supplies for the free barbecue which will follow the 12.30pm official opening. Landscaping is being delayed until after summer although the park has barbecues, children’s playground, a shelter with picnic tables and benches and parking. An information shelter will be finished in the next few months.

shop IN STORE or ONLINE

www.ozdesignfurniture.com.au 20-50% off storewide & online (seleced furniutre*) aon all new orders of furniture and homewares from 5-01-2016 till 18-01-2016 inclusive. Minimum discount of 20% applicable up to 50% off on selected ﬂoor and clearance stock. Not to be used in conjunction with any other offer including Super Savers. Terms and conditions apply visit www.ozdesignfurniture.com.au for further information