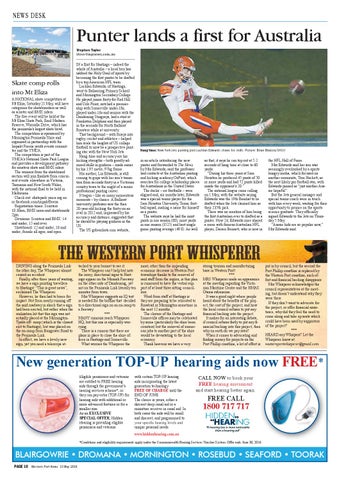 Skate comp rolls into Mt Eliza A NATIONAL skate competition at Mt Eliza, Saturday 21 May, will have categories for skateboarders as well as scooter and BMX riders. The free event will be held at the Mt Eliza Skate Park, Emil Madsen Reserve, Wooralla Drive, which has the peninsula's largest skate bowl. The competition is sponsored by Mornington Peninsula Shire and organised in partnership with the Impakt Freeza youth events committee and the YMCA. The competition is part of the YMCAâ&#x20AC;&#x2122;s National Skate Park League and provides a development pathway for amateur skate and BMX riders. The winners from the skateboard section will join finalists from concurrent events elsewhere in Victoria, Tasmania and New South Wales, with the national final to be held in Melbourne. Check out: skatepark.ymca.org.au or facebook.com/impaktfreeza Registration times: Scooters 10.30am, BMX noon and skateboards 2pm. Divisions: Scooters and BMX: 14 and under; 15 and over. Skateboard: 12 and under; 16 and under; female all ages, and open.

IN a first for Hastings â&#x20AC;&#x201C; indeed the whole of Australia â&#x20AC;&#x201C; a local boy has nabbed the Holy Grail of sports by becoming the first punter to be drafted by a top American NFL team. Lachlan Edwards, of Hastings, went to Balnarring Primary School and Mornington Secondary College. He played junior footy for Red Hill and Crib Point, notched a premiership with Somerville under-18s, played under-16s and seniors with the Dandenong Stingrays, had a stint at Frankston Dolphins and then played in the seconds for North Ballarat Roosters while at university. That background â&#x20AC;&#x201C; with forays into rugby, cricket and athletics â&#x20AC;&#x201C; helped him scale the heights of US college football to now be a prospective punting star with the New York Jets. Hang-time and accuracy are his kicking strengths â&#x20AC;&#x201C; both greatly admired skills in gridiron â&#x20AC;&#x201C; made easier by his 1.95 metre, 97kg frame. His mother, Lin Edwards, is still coming to grips with her sonâ&#x20AC;&#x2122;s transition from seconds footy in a Victorian country town to the might of a senior professional punting career. It began â&#x20AC;&#x201C; like so many momentous moments â&#x20AC;&#x201C; by chance. A Ballarat university professor saw the then 20-year-old kicking the footy on an oval in 2012 and, impressed by his accuracy and distance, suggested that he should be playing gridiron in the US. The US gobearkats.com website,

in an article introducing the new punter and forwarded to The News by Mrs Edwards, said the professor had contacts at the Australian punting and kicking academy OzPunt, which searches for college scholarship places for Australians in the United States. The ducks â&#x20AC;&#x201C; err footballs â&#x20AC;&#x201C; were aligned and, six months later, Edwards was a special teams player for the Sam Houston University, Texas, football squad, making a name for himself as a punter. The website says he had the most punts in one season (80), most yards in one season (3525) and best single game punting average (49.8). As well

as that, it says he can top out at 5.2 seconds of hang time at close to 60 yards. â&#x20AC;&#x153;During his three years at Sam Houston he produced 45 punts of 50 or more yards and had 72 punts killed inside the opponentâ&#x20AC;&#x2122;s 20.â&#x20AC;? The national league came calling on 1 May, with the website saying Edwards was the 19th Bearkat to be drafted when the Jets claimed him as their 235th pick. There was no mention of him being the first Australian ever to drafted as a punter. Now 24, Edwards once shared a room with famous Australian NFL player, Darren Bennett, who is now in

DRIVING along the Peninsula Link the other day, The Whisperer almost caused an accident. Finally, after three years of waiting, we have a sign pointing travellers to Hastings! â&#x20AC;&#x153;This is great newsâ&#x20AC;?, exclaimed The Whisperer. However, he then had to brace for impact. Not from nearly running off the said roadway in shock that a sign had been erected, but rather when the realisation hit that this sign was not actually placed at the MorningtonTyabb off- ramp (which is the closest exit to Hastings), but was placed on the on-ramp from Bungower Road to the Peninsula Link. In effect, we have a lovely new sign, yet you need a telescope at-

tached to your bonnet to see it. The Whisperer canâ&#x20AC;&#x2122;t help but note the irony; directional signs to Hastings appear on the Monash Freeway on the other side of Dandenong, yet not on the Peninsula Link literally ten minutes from town. Mrs Whisperer suggests an IQ test is needed for the boffins that decided to a directional sign on an on-ramp to a freeway. *** MANY rumours reach Whisperer HQ, but this one is especially worrying. There is a rumour that there are plans in place to close the shire offices in Hastings and Somerville. What worries the Whisperer the

most, other than the impending economic decrease in Western Port townships thanks to the removal of said staff from the region, is this plan is rumoured to have the verbal support of at least three sitting councillors. Word from staff at Hastings is they are preparing to be relocated to Rosebud or Mornington sometime in the next 12 months. The closure of the Hastings and Somerville offices may be celebrated by some (particularly the shire bean counters) but the removal of numerous jobs to another part of the shire would be devastating to the local economy. Thank heavens we have a very

strong tourism and manufacturing base in Western Port! *** MRS Whisperer made an appearance at the meeting regarding the Victorian Maritime Centre and the HMAS Otama submarine. It was a good night where people heard about the benefits of the project, the cost of the project, and how the local council refuses to put any financial backing into the project. It makes for an interesting debate, if council refuses flatly to put any financial backing into this project, then why on earth do we pay rates? When it comes to advocating and finding money for projects on the Port Phillip coastline, a lot of effort is

the NFL Hall of Fame. Mrs Edwards said her son was seemingly overlooked by a sports hungry media, which focused on another roommate, Tom Hackett, as the next likely pro football star, with Edwards pinned as â&#x20AC;&#x153;just another Aussie hopefulâ&#x20AC;?. But the Jets general manager and special teams coach were in touch with him every week, waiting for their opportunity to pounce on the sports science graduate. They officially signed Edwards to the Jets on Thursday 5 May. â&#x20AC;&#x153;Aussie kids are so popular now,â&#x20AC;? Mrs Edwards said.

put in by council, but the second the Port Phillip coastline is replaced by the Western Port coastline, such effort and financial backing disappears. Mrs Whisperer acknowledges the council representatives at the meeting, but doesnâ&#x20AC;&#x2122;t understand why they were there. If they donâ&#x20AC;&#x2122;t want to advocate for the project, or offer financial assistance, why did they feel the need to come along and take up seats which could have been used by supporters of the project? *** HEARD any Whispers? Let the Whisperer know at: westernportwhisperer@gmail.com

with certain TOP-UP hearing aids incorporating the latest generation technology FREE OF CHARGE until the END OF JUNE The choice is yours, either a discreet deep canal aid or a miniature receiver in canal aid. In both cases the aids will be small and discreet, and programmed to \RXUVSHFLÂżFKHDULQJOHYHOVDQG unique personal needs.