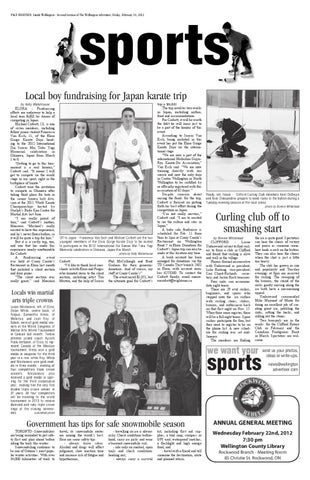 Local boy fundraising for Japan karate trip by Kelly Waterhouse ELORA - Fundraising efforts are underway to help a local teen fulfill his dream of competing in Japan. Michael Corbett, 13, is one of seven members, including fellow junior student Francesca Van Esch, 11, of the Elora Gorge Karate Dojo heading to the 2012 International Dai Sensei Mei Toku Yagi Memorial celebration in Okinawa, Japan from March 1 to 6. “Getting to go to this tournament is a real honour,” Corbett said. “It means I will get to compete on the world stage in my sport, right in the birthplace of karate.” Corbett won the invitation to compete in Okinawa after taking third place for kata in the senior brown belt division at the 2011 World Karate Championships hosted by Guelph’s Budo Kan Centre for Martial Arts last June. “I am really proud of him,” said Corbett’s mother, Maureen. “Michael’s really excited to have this experience, and he’s never flown before, so it will be quite a trip for him.” But it is a costly trip, too, and one that has made this experience nearly unattainable for Corbett. A fundraising event was held at Crazy Carole’s Restaurant in Elora last month that included a silent auction and door prizes. “The silent auction was really great,” said Maureen

Off to Japan - Francesca Van Esch and Michael Corbett are the two youngest members of the Elora Gorge Karate Dojo to be invited to participate in the 2012 International Dai Sensei Mei Toku Yagi Memorial celebration in Okinawa, Japan this March.

Corbett. “I’d like to thank local merchants in both Elora and Fergus who donated items to the silent auction, including artist Tim Murton, and the help of Sensei

Phil McCullough and Brad Graham for their generous donations. And of course, my staff at Crazy Carole’s” The event raised $1,051, but the ultimate goal for Corbett’s

trip is $6,000. The trip involves two weeks in Japan, including airfare, food and accommodations. For Corbett, it will be worth the debt he will incur just to be a part of the honour of this event. According to Sensei Van Esch, being included in this event has put the Elora Gorge Karate Dojo on the international stage. “We are now a part of the international Meibukan GojyuRyu Karate-Do Association,” Van Esch said. “We are now training directly with our source and now the only dojo in Centre Wellington or North Wellington to be certified by or officially registered with this association of 62 dojos.” Despite concern about raising the funds for the trip, Corbett is focused on putting forth his best effort during the competition in Japan. “I’m not really nervous,” Corbett said. “I am to excited to see the culture and sites in Japan.” A bake sale fundraiser is scheduled for Feb. 11 from 9am to 1pm at Crazy Carole’s Restaurant on Wellington Road 7 in Elora. Donations for Corbett’s Japan trip can also be made at this location any time. A bank account has been arranged for donations via the TD Canada Trust branch 2402 in Elora, with account number 6273260. To contact the Corbett family, email maureencorbett@wightman.ca.

Locals win martial arts triple crowns Lucas Nikolasevic, left, of Elora; Dolan White, centre back, of Fergus; Samantha Kress, of Waterloo; and Josh Roy, of Salem, were all gold medal winners at the World Congress of Martial Arts World Tournament in Cancun last month. Twelve athletes joined coach Kyoshi Frank Verbakel, of Elora, to represent Canada at the Mexican tournament. Kress won a gold medal in weapons for the third year in a row, while Roy, White and Nikolasevic won gold medals in three events - making all four competitors triple crown winners. Nikolasevic also received a gold medal in sparring for the third consecutive year, making him the very first double triple crown winner in 37 years. All four competitors will be traveling to the world tournament in 2013 to receive diamond and ruby triple crown rings at the closing ceremonies. submitted photo

Curling club off to smashing start by Bonnie Whitehead CLIFFORD Lorne Underwood set out to find curlers to form a club in Clifford and found that curling is alive and well in the village. Players formed an executive with Underwood as president; Luke Hartung vice-president; Cari Chard-Richards secretary; and Jackie Rock treasurer. Four rinks can accommodate eight teams. There are 29 avid curlers, beginners, and spares who stepped onto the ice surface with curling shoes, sliders, brooms, and enthusiasm back on that first night on Nov. 15. When three more register, there will be a full eight teams. Spare curlers participate for free, but they need to register to be on the phone list. A new schedule for curling was set midJanuary. The members are finding

the ice is quite good. Spectators can hear the cheers of victory and praise as someone somehow lands a rock on the button. They can also hear the cheers when the shot is just a little too heavy. The club has grown in size and popularity and Tuesday evenings at 8pm are reserved for curling. The sweeping of the brooms, the sound of the rocks gently moving along the ice both have a mesmerizing appeal. Underwood commended Mike Maynard of Minto for doing an excellent job of creating great ice, pebbling the rinks, setting the hacks, and rolling out the stones. Two bonspiels are in the works: for the Clifford Rotary Club in February and the Canadian Foodgrains Bank in March. Spectators are welcome.

Government has tips for safe snowmobile season TORONTO - Snowmobilers are being reminded to put safety first and plan ahead before riding the trails this winter. Snowmobiling continues to be one of Ontario’s most popular winter activities. With over 34,000 kilometres of trails to

travel, its snowmobile routes are among the world’s best. Here are some safety tips: - always drive sober. Alcohol and drugs will affect judgment, slow reaction time and increase risk of fatigue and hypothermia;

kit, including first aid supplies, a trail map, compass or GPS unit, waterproof matches, a flashlight and high energy food; and - travel with a friend and tell someone the destination, route and planned return. 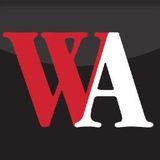