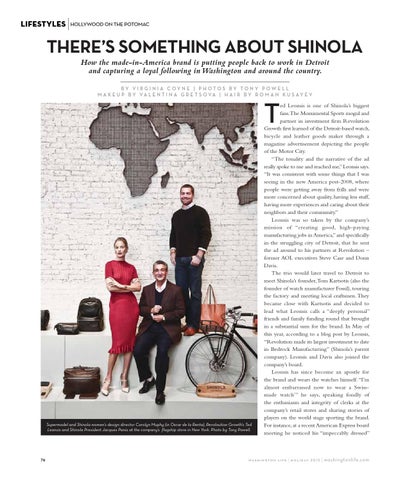 THERE’SSOMETHINGABOUTSHINOLA How the made-in-America brand is putting people back to work in Detroit and capturing a loyal following in Washington and around the country. BY VIRGINIA COYNE | PHOTOS BY TONY POWELL M A K E U P B Y VA L E N T I N A G R E T S O VA | H A I R B Y R O M A N K U S AY E V

ed Leonsis is one of Shinola’s biggest fans.The Monumental Sports mogul and partner in investment firm Revolution Growth first learned of the Detroit-based watch, bicycle and leather goods maker through a magazine advertisement depicting the people of the Motor City. “The tonality and the narrative of the ad really spoke to me and reached me,” Leonsis says. “It was consistent with some things that I was seeing in the new America post-2008, where people were getting away from frills and were more concerned about quality, having less stuff, having more experiences and caring about their neighbors and their community.” Leonsis was so taken by the company’s mission of “creating good, high-paying manufacturing jobs in America,” and specifically in the struggling city of Detroit, that he sent the ad around to his partners at Revolution – former AOL executives Steve Case and Donn Davis. The trio would later travel to Detroit to meet Shinola’s founder, Tom Kartsotis (also the founder of watch manufacturer Fossil), touring the factory and meeting local craftsmen. They became close with Kartsotis and decided to lead what Leonsis calls a “deeply personal” friends and family funding round that brought in a substantial sum for the brand. In May of this year, according to a blog post by Leonsis, “Revolution made its largest investment to date in Bedrock Manufacturing” (Shinola’s parent company). Leonsis and Davis also joined the company’s board. Leonsis has since become an apostle for the brand and wears the watches himself. “I’m almost embarrassed now to wear a Swissmade watch’” he says, speaking fondly of the enthusiasm and integrity of clerks at the company’s retail stores and sharing stories of players on the world stage sporting the brand. For instance, at a recent American Express board meeting he noticed his “impeccably dressed”