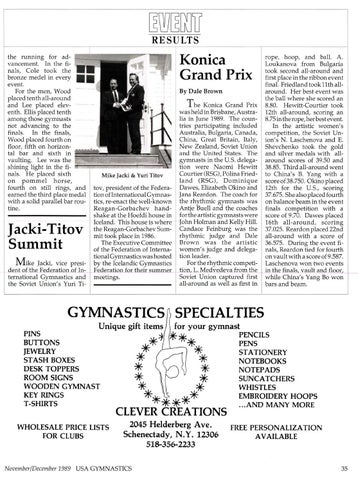 the running for advancement. In the finals, Cole took the bronze medel in every event. For the men, Wood placed tenth all-around and Lee placed eleventh. Ellis placed tenth among those gymnasts not advancing to the finals . In the finals, Wood placed fourth on floor, fifth on horizontal bar and sixth in vaulting. Lee was the shining light in the finals. He placed sixth on pommel horse, fourth on still rings, and earned the third place medal with a solid parallel bar routine.

The Konica Grand Prix was held in Brisbane, Australia in June 1989. The countries participating included Australia, Bulgaria, Canada, China, Great Britain, Italy, New Zealand, Soviet Union and the United States. The gymnasts in the U.S. delegation were Naomi Hewitt Courtier (RSG), Polina Friedland (RSG) , Dominique Dawes, Elizabeth Okino and Jana Reardon. The coach for the rhythmic gymnasts was Antje Buell and the coaches for the artistic gymnasts were John Holman and Kelly Hill. Candace Feinburg was the rhythmic judge and Dale Brown was the artistic women's judge and delegation leader. For the rhythmic competition, L. Medvedeva from the Soviet Union captured first all-around as well as first in

rope, hoop, and ball. A. Loukanova from Bulgaria took second all-around and first place in the ribbon event final. Friedland took 11 th allaround. Her best event was the ball where she scored an 8.80. Hewitt-Courtier took 12th all-around, scoring an 8.75 in the rope, her best event. In the artistic women's competition, the Soviet Union's N. Laschenova and E. Shevchenko took the gold and silver medals with allaround scores of 39.50 and 38.85. Third all-around went to China' s B. Yang with a scoreof38.750.0kinoplaced 12th for the U.S., scoring 37.675. She also placed fourth on balance beam in the event finals competition with a score of 9.70. Dawes placed 16th all-around, scoring 37.025. Reardon placed 22nd all-around with a score of 36.575. During the event finals, Reardon tied for fourth on vault with a score of 9.587. Laschenova won two events in the finals, vault and floor, while China's Yang Bo won bars and beam. 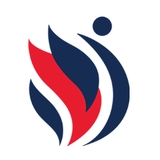