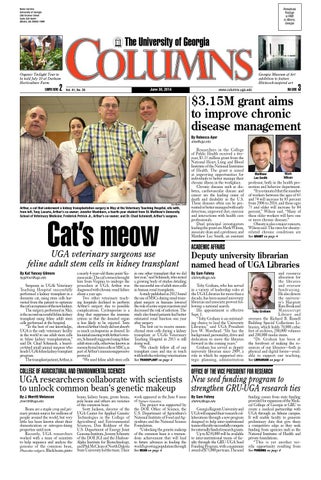 The University of Georgia

a nearly 4-year-old flame point Siamese male.The cat’s owners brought him from Virginia to undergo the procedure at UGA. Arthur was diagnosed with chronic renal failure about a year ago. Two other veterinary teaching hospitals declined to perform Arthur’s surgery due to possible complications. Cyclosporine is a drug that suppresses the immune system so that the donated organ is less likely to be rejected. Tests showed Arthur’s body did not absorb as much cyclosporine as desired. In his initial meeting with Arthur’s owners, Schmiedt suggested using feline adult stem cells, otherwise known as mesenchymal stem cells or MSCs, as part of Arthur’s immunosuppressive protocol. “We used feline adult stem cells

in one other transplant that we did last year,” said Schmiedt, who noted a growing body of studies detailing the successful use of adult stem cells in human renal transplants. A study published in 2012 found the use of MSCs during renal transplant surgery in humans lowered the risk of acute organ rejection and decreased the risk of infection. The study also found patients had better estimated renal function one year after surgery. The first cat to receive mesenchymal stem cells during a kidney transplant at UGA’s Veterinary Teaching Hospital in 2013 is still doing well. “We closely follow all of our transplant cases and stay in touch with both the referring veterinarians

College of Agricultural and Environmental Sciences

Beans are a staple crop and primary protein source for millions of people around the world, but very little has been known about their domestication or nitrogen-fixing properties until now. Recently, UGA researchers worked with a team of scientists to help sequence and analyze the genome of the common bean, Phaseolus vulgaris. Black beans, pinto

beans, kidney beans, green beans, pole beans and others are varieties of the common bean. Scott Jackson, director of the UGA Center for Applied Genetic Technologies in the College of Agricultural and Environmental Sciences, Dan Rokhsar of the U.S. Department of Energy Joint Genome Institute, Jeremy Schmutz of the DOE JGI and the HudsonAlpha Institute for Biotechnology, and Phil McClean of North Dakota State University led the team. Their

work appeared in the June 8 issue of Nature Genetics. The project was supported by the DOE Office of Science, the U.S. Department of Agriculture’s National Institute of Food and Agriculture and the National Science Foundation. “Unlocking the genetic makeup of the common bean is a tremendous achievement that will lead to future advances in feeding the world’s growing population through

Researchers in the College of Public Health received a fiveyear, $3.15 million grant from the National Heart, Lung and Blood Institute of the National Institutes of Health. The grant is aimed at improving opportunities for individuals to better manage their chronic illness in the workplace. Chronic diseases such as diabetes, cardiovascular disease and cancer are the leading cause of death and disability in the U.S. These diseases often can be prevented or better managed with early detection, improved diet, exercise and interactions with health care professionals. Dual principal investigators leading the grant are Mark Wilson, associate dean and a professor, and Matthew Lee Smith, an assistant

professor, both in the health promotion and behavior department. “It is estimated that the number of workers between the ages of 65 and 74 will increase by 83 percent from 2006 to 2016, and those ages 75 and older will increase by 84 percent,” Wilson said. “Many of these older workers will have one or more chronic diseases.” Obesity is also a major concern, Wilson said. The rates for obesityrelated chronic conditions are

Toby Graham, who has served in a variety of leadership roles at the UGA Libraries for more than a decade, has been named university librarian and associate provost following a national search. His appointment is effective Sept. 1. “Toby Graham is an outstanding choice to lead the University Libraries,” said UGA President Jere W. Morehead. “He has the background, personality, drive and dedication to move the libraries forward in the coming years.” Graham has served as deputy university librarian since 2009, a role in which he supported strategic planning, administration

and resource allocation for the libraries and oversaw fundraising. He also directs the university’s Hargrett Rare Book and Manuscript Toby Graham Library and oversees the Richard B. Russell Building Special Collections Libraries, which holds 70,000 cubic feet of archives, 200,000 volumes and 200,000 media items. “Dr. Graham has been at the forefront of making the resources of our libraries—both in physical and digital forms—available to support our teaching,

Office of the Vice President for Research

Georgia Regents University and UGA will expand their research collaborations through a new program designed to help inter-institutional teams of faculty successfully compete for externally funded research grants. Up to $250,000 will be available to inter-institutional teams of faculty through the GRU-UGA Seed Funding Program, with a maximum award of $75,000 per team.The seed

funding comes from state funding provided for expansion of the Medical College of Georgia at GRU to create a medical partnership with UGA through an Athens campus. It will enable faculty to generate preliminary data that give them a competitive edge as they seek funding from agencies such as the National Institutes of Health and private foundations. “This is yet another terrific opportunity resulting from 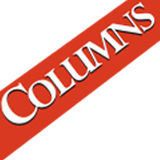