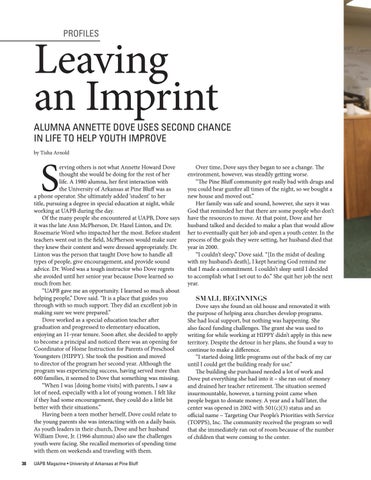 erving others is not what Annette Howard Dove thought she would be doing for the rest of her life. A 1980 alumna, her first interaction with the University of Arkansas at Pine Bluff was as a phone operator. She ultimately added ‘student’ to her title, pursuing a degree in special education at night, while working at UAPB during the day. Of the many people she encountered at UAPB, Dove says it was the late Ann McPherson, Dr. Hazel Linton, and Dr. Rosemarie Word who impacted her the most. Before student teachers went out in the field, McPherson would make sure they knew their content and were dressed appropriately. Dr. Linton was the person that taught Dove how to handle all types of people, give encouragement, and provide sound advice. Dr. Word was a tough instructor who Dove regrets she avoided until her senior year because Dove learned so much from her. “UAPB gave me an opportunity. I learned so much about helping people,” Dove said. “It is a place that guides you through with so much support. They did an excellent job in making sure we were prepared.” Dove worked as a special education teacher after graduation and progressed to elementary education, enjoying an 11-year tenure. Soon after, she decided to apply to become a principal and noticed there was an opening for Coordinator of Home Instruction for Parents of Preschool Youngsters (HIPPY). She took the position and moved to director of the program her second year. Although the program was experiencing success, having served more than 600 families, it seemed to Dove that something was missing. “When I was [doing home visits] with parents, I saw a lot of need, especially with a lot of young women. I felt like if they had some encouragement, they could do a little bit better with their situations.” Having been a teen mother herself, Dove could relate to the young parents she was interacting with on a daily basis. As youth leaders in their church, Dove and her husband William Dove, Jr. (1966 alumnus) also saw the challenges youth were facing. She recalled memories of spending time with them on weekends and traveling with them. 38

Over time, Dove says they began to see a change. The environment, however, was steadily getting worse. “The Pine Bluff community got really bad with drugs and you could hear gunfire all times of the night, so we bought a new house and moved out.” Her family was safe and sound, however, she says it was God that reminded her that there are some people who don’t have the resources to move. At that point, Dove and her husband talked and decided to make a plan that would allow her to eventually quit her job and open a youth center. In the process of the goals they were setting, her husband died that year in 2000. “I couldn’t sleep,” Dove said. “[In the midst of dealing with my husband’s death], I kept hearing God remind me that I made a commitment. I couldn’t sleep until I decided to accomplish what I set out to do.” She quit her job the next year.

Dove says she found an old house and renovated it with the purpose of helping area churches develop programs. She had local support, but nothing was happening. She also faced funding challenges. The grant she was used to writing for while working at HIPPY didn’t apply in this new territory. Despite the detour in her plans, she found a way to continue to make a difference. “I started doing little programs out of the back of my car until I could get the building ready for use.” The building she purchased needed a lot of work and Dove put everything she had into it – she ran out of money and drained her teacher retirement. The situation seemed insurmountable, however, a turning point came when people began to donate money. A year and a half later, the center was opened in 2002 with 501(c)(3) status and an official name – Targeting Our People’s Priorities with Service (TOPPS), Inc. The community received the program so well that she immediately ran out of room because of the number of children that were coming to the center. 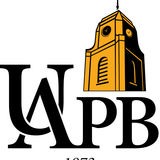 University of Arkansas at Pine Bluff

After losing his best friend and both legs in a tragic accident, Treston Hawkins is moving forward and inspiring others to do the same.

After losing his best friend and both legs in a tragic accident, Treston Hawkins is moving forward and inspiring others to do the same.