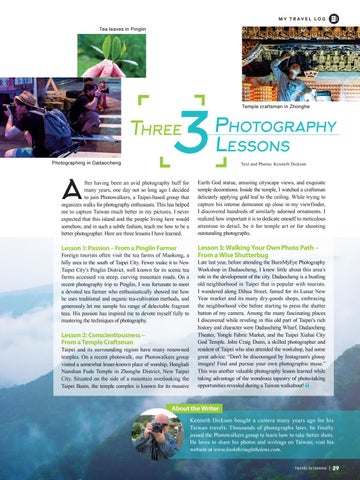 fter having been an avid photography buff for many years, one day not so long ago I decided to join Photowalkers, a Taipei-based group that organizes walks for photography enthusiasts. This has helped me to capture Taiwan much better in my pictures. I never expected that this island and the people living here would somehow, and in such a subtle fashion, teach me how to be a better photographer. Here are three lessons I have learned.

Earth God statue, amazing cityscape views, and exquisite temple decorations. Inside the temple, I watched a craftsman delicately applying gold leaf to the ceiling. While trying to capture his intense demeanor up close in my viewfinder, I discovered hundreds of similarly adorned ornaments. I realized how important it is to dedicate oneself to meticulous attention to detail, be it for temple art or for shooting outstanding photographs.

Lesson 1: Passion – From a Pinglin Farmer Foreign tourists often visit the tea farms of Maokong, a hilly area in the south of Taipei City. Fewer make it to New Taipei City’s Pinglin District, well known for its scenic tea farms accessed via steep, curving mountain roads. On a recent photography trip to Pinglin, I was fortunate to meet a devoted tea farmer who enthusiastically showed me how he uses traditional and organic tea-cultivation methods, and generously let me sample his range of delectable fragrant teas. His passion has inspired me to devote myself fully to mastering the techniques of photography.

Lesson 3: Walking Your Own Photo Path – From a Wise Shutterbug Late last year, before attending the BurnMyEye Photography Workshop in Dadaocheng, I knew little about this area’s role in the development of the city. Dadaocheng is a bustling old neighborhood in Taipei that is popular with tourists. I wandered along Dihua Street, famed for its Lunar New Year market and its many dry-goods shops, embracing the neighborhood vibe before starting to press the shutter button of my camera. Among the many fascinating places I discovered while reveling in this old part of Taipei’s rich history and character were Dadaocheng Wharf, Dadaocheng Theater, Yongle Fabric Market, and the Taipei Xiahai City God Temple. John Craig Dunn, a skilled photographer and resident of Taipei who also attended the workshop, had some great advice: “Don't be discouraged by Instagram's glossy images! Find and pursue your own photographic muse.” This was another valuable photography lesson learned while taking advantage of the wondrous tapestry of photo-taking opportunities revealed during a Taiwan walkabout!

Lesson 2: Conscientiousness – From a Temple Craftsman Taipei and its surrounding region have many renowned temples. On a recent photowalk, our Photowalkers group visited a somewhat lesser-known place of worship, Hongludi Nanshan Fude Temple in Zhonghe District, New Taipei City. Situated on the side of a mountain overlooking the Taipei Basin, the temple complex is known for its massive

Kenneth Dickson bought a camera many years ago for his Taiwan travels. Thousands of photographs later, he finally joined the Photowalkers group to learn how to take better shots. He loves to share his photos and writings on Taiwan; visit his website at www.lookthroughthelens.com. TRAVEL IN TAIWAN ｜29 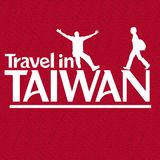