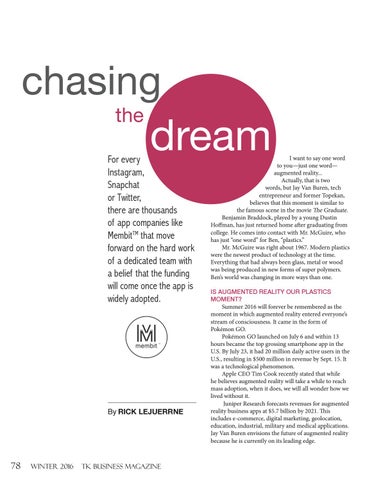 For every Instagram, Snapchat or Twitter, there are thousands of app companies like MembitTM that move forward on the hard work of a dedicated team with a belief that the funding will come once the app is widely adopted.

I want to say one word to you—just one word— augmented reality... Actually, that is two words, but Jay Van Buren, tech entrepreneur and former Topekan, believes that this moment is similar to the famous scene in the movie The Graduate. Benjamin Braddock, played by a young Dustin Hoffman, has just returned home after graduating from college. He comes into contact with Mr. McGuire, who has just “one word” for Ben, “plastics.” Mr. McGuire was right about 1967. Modern plastics were the newest product of technology at the time. Everything that had always been glass, metal or wood was being produced in new forms of super polymers. Ben’s world was changing in more ways than one. IS AUGMENTED REALITY OUR PLASTICS MOMENT? Summer 2016 will forever be remembered as the moment in which augmented reality entered everyone’s stream of consciousness. It came in the form of Pokémon GO. Pokémon GO launched on July 6 and within 13 hours became the top grossing smartphone app in the U.S. By July 23, it had 20 million daily active users in the U.S., resulting in $500 million in revenue by Sept. 15. It was a technological phenomenon. Apple CEO Tim Cook recently stated that while he believes augmented reality will take a while to reach mass adoption, when it does, we will all wonder how we lived without it. Juniper Research forecasts revenues for augmented reality business apps at $5.7 billion by 2021. This includes e-commerce, digital marketing, geolocation, education, industrial, military and medical applications. Jay Van Buren envisions the future of augmented reality because he is currently on its leading edge. 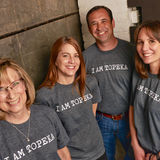