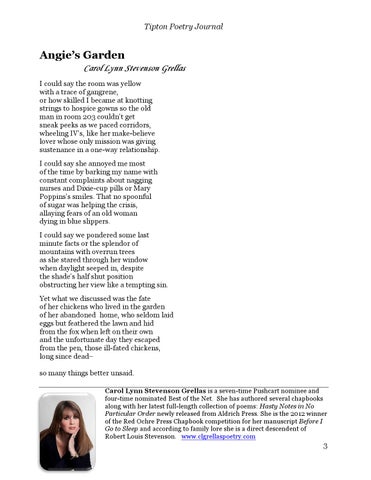 Angie’s Garden Carol Lynn Stevenson Grellas I could say the room was yellow with a trace of gangrene, or how skilled I became at knotting strings to hospice gowns so the old man in room 203 couldn’t get sneak peeks as we paced corridors, wheeling IV’s, like her make-believe lover whose only mission was giving sustenance in a one-way relationship. I could say she annoyed me most of the time by barking my name with constant complaints about nagging nurses and Dixie-cup pills or Mary Poppins’s smiles. That no spoonful of sugar was helping the crisis, allaying fears of an old woman dying in blue slippers. I could say we pondered some last minute facts or the splendor of mountains with overrun trees as she stared through her window when daylight seeped in, despite the shade’s half shut position obstructing her view like a tempting sin. Yet what we discussed was the fate of her chickens who lived in the garden of her abandoned home, who seldom laid eggs but feathered the lawn and hid from the fox when left on their own and the unfortunate day they escaped from the pen, those ill-fated chickens, long since dead− so many things better unsaid. Carol Lynn Stevenson Grellas is a seven-time Pushcart nominee and four-time nominated Best of the Net. She has authored several chapbooks along with her latest full-length collection of poems: Hasty Notes in No Particular Order newly released from Aldrich Press. She is the 2012 winner of the Red Ochre Press Chapbook competition for her manuscript Before I Go to Sleep and according to family lore she is a direct descendent of Robert Louis Stevenson. www.clgrellaspoetry.com