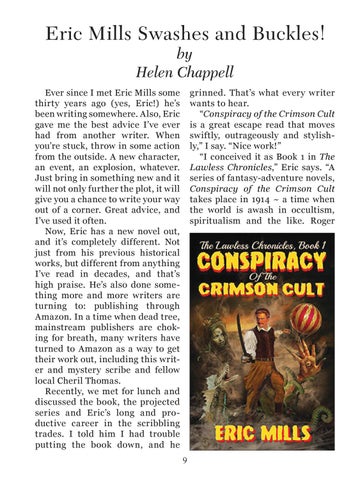 Ever since I met Eric Mills some thirty years ago (yes, Eric!) he’s been writing somewhere. Also, Eric gave me the best advice I’ve ever had from another writer. When you’re stuck, throw in some action from the outside. A new character, an event, an explosion, whatever. Just bring in something new and it will not only further the plot, it will give you a chance to write your way out of a corner. Great advice, and I’ve used it often. Now, Eric has a new novel out, and it’s completely different. Not just from his previous historical works, but different from anything I’ve read in decades, and that’s high praise. He’s also done something more and more writers are turning to: publishing through Amazon. In a time when dead tree, mainstream publishers are choking for breath, many writers have turned to Amazon as a way to get their work out, including this writer and mystery scribe and fellow local Cheril Thomas. Recently, we met for lunch and discussed the book, the projected series and Eric’s long and productive career in the scribbling trades. I told him I had trouble putting the book down, and he

grinned. That’s what every writer wants to hear. “Conspiracy of the Crimson Cult is a great escape read that moves swiftly, outrageously and stylishly,” I say. “Nice work!” “I conceived it as Book 1 in The Lawless Chronicles,” Eric says. “A series of fantasy-adventure novels, Conspiracy of the Crimson Cult takes place in 1914 ~ a time when the world is awash in occultism, spiritualism and the like. Roger