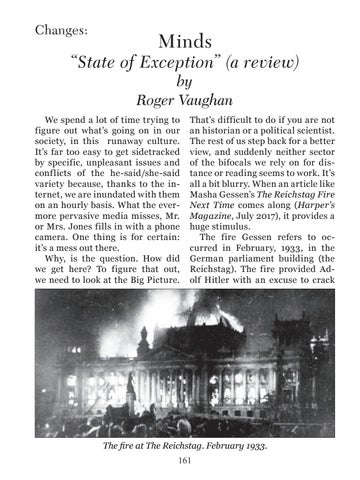 “State of Exception” (a review) by Roger Vaughan

We spend a lot of time trying to figure out what’s going on in our society, in this runaway culture. It’s far too easy to get sidetracked by specific, unpleasant issues and conf licts of the he-said/she-said variety because, thanks to the internet, we are inundated with them on an hourly basis. What the evermore pervasive media misses, Mr. or Mrs. Jones fills in with a phone camera. One thing is for certain: it’s a mess out there. Why, is the question. How did we get here? To figure that out, we need to look at the Big Picture.

That’s difficult to do if you are not an historian or a political scientist. The rest of us step back for a better view, and suddenly neither sector of the bifocals we rely on for distance or reading seems to work. It’s all a bit blurry. When an article like Masha Gessen’s The Reichstag Fire Next Time comes along (Harper’s Magazine, July 2017), it provides a huge stimulus. The fire Gessen refers to occurred in February, 1933, in the German parliament building (the Reichstag). The fire provided Adolf Hitler with an excuse to crack