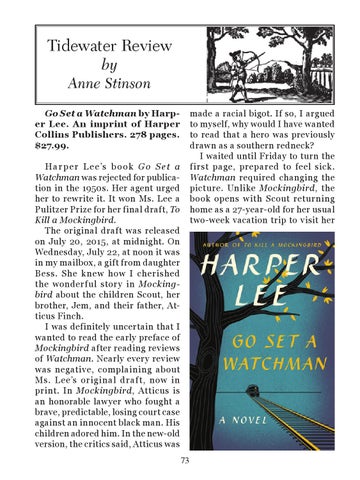 made a racial bigot. If so, I argued to myself, why would I have wanted to read that a hero was previously drawn as a southern redneck? I waited until Friday to turn the first page, prepared to feel sick. Watchman required changing the picture. Unlike Mockingbird, the book opens with Scout returning home as a 27-year-old for her usual two-week vacation trip to visit her

Ha r p er L e eâ&#x20AC;&#x2122;s b o ok G o S e t a Watchman was rejected for publication in the 1950s. Her agent urged her to rewrite it. It won Ms. Lee a Pulitzer Prize for her final draft, To Kill a Mockingbird. The original draft was released on July 20, 2015, at midnight. On Wednesday, July 22, at noon it was in my mailbox, a gift from daughter Bess. She knew how I cherished the wonderful story in Mockingbird about the children Scout, her brother, Jem, and their father, Atticus Finch. I was definitely uncertain that I wanted to read the early preface of Mockingbird after reading reviews of Watchman. Nearly every review was negative, complaining about Ms. Leeâ&#x20AC;&#x2122;s original draf t, now in print. In Mockingbird, Atticus is an honorable lawyer who fought a brave, predictable, losing court case against an innocent black man. His children adored him. In the new-old version, the critics said, Atticus was 73