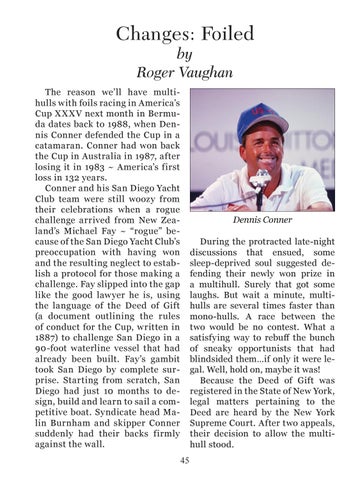 The reason we’ll have multihulls with foils racing in America’s Cup XXXV next month in Bermuda dates back to 1988, when Dennis Conner defended the Cup in a catamaran. Conner had won back the Cup in Australia in 1987, after losing it in 1983 ~ America’s first loss in 132 years. Conner and his San Diego Yacht Club team were still woozy from their celebrations when a rogue challenge arrived from New Zealand’s Michael Fay ~ “rogue” because of the San Diego Yacht Club’s preoccupation with having won and the resulting neglect to establish a protocol for those making a challenge. Fay slipped into the gap like the good lawyer he is, using the language of the Deed of Gift (a document outlining the rules of conduct for the Cup, written in 1887) to challenge San Diego in a 90-foot waterline vessel that had already been built. Fay’s gambit took San Diego by complete surprise. Starting from scratch, San Diego had just 10 months to design, build and learn to sail a competitive boat. Syndicate head Malin Burnham and skipper Conner suddenly had their backs firmly against the wall.

Dennis Conner During the protracted late-night discussions that ensued, some sleep-deprived soul suggested defending their newly won prize in a multihull. Surely that got some laughs. But wait a minute, multihulls are several times faster than mono-hulls. A race between the two would be no contest. What a satisfying way to rebuff the bunch of sneaky opportunists that had blindsided them…if only it were legal. Well, hold on, maybe it was! Because the Deed of Gift was registered in the State of New York, legal matters pertaining to the Deed are heard by the New York Supreme Court. After two appeals, their decision to allow the multihull stood. 45