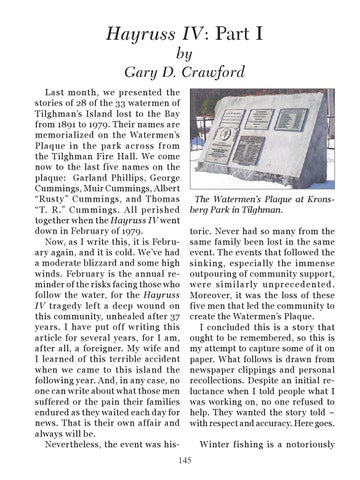 Last month, we presented the stories of 28 of the 33 watermen of Tilghman’s Island lost to the Bay from 1891 to 1979. Their names are memorialized on the Watermen’s Plaque in t he park across f rom the Tilghman Fire Hall. We come now to the last five names on the plaque: Garland Phillips, George Cummings, Muir Cummings, Albert “Rusty” Cummings, and Thomas “T. R.” Cummings. A ll perished together when the Hayruss IV went down in February of 1979. Now, as I write this, it is February again, and it is cold. We’ve had a moderate blizzard and some high winds. February is the annual reminder of the risks facing those who follow the water, for the Hayruss IV tragedy left a deep wound on this community, unhealed after 37 years. I have put off writing this article for several years, for I am, after all, a foreigner. My wife and I learned of this terrible accident when we came to this island the following year. And, in any case, no one can write about what those men suffered or the pain their families endured as they waited each day for news. That is their own affair and always will be. Nevertheless, the event was his-

The Watermen’s Plaque at Kronsberg Park in Tilghman. toric. Never had so many from the same family been lost in the same event. The events that followed the sinking, especially the immense outpouring of community support, wer e si m i la rly u npr e c e dente d . Moreover, it was the loss of these five men that led the community to create the Watermen’s Plaque. I concluded this is a story that ought to be remembered, so this is my attempt to capture some of it on paper. What follows is drawn from newspaper clippings and personal recollections. Despite an initial reluctance when I told people what I was working on, no one refused to help. They wanted the story told ~ with respect and accuracy. Here goes.

Winter fishing is a notoriously