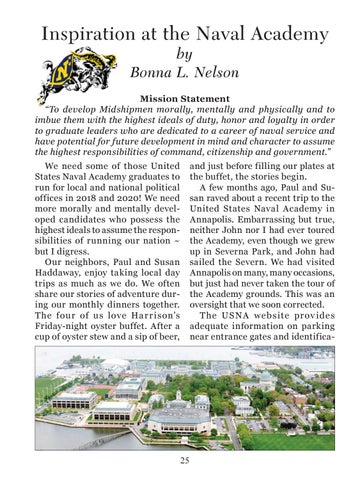 Inspiration at the Naval Academy by Bonna L. Nelson

Mission Statement â&amp;#x20AC;&amp;#x153;To develop Midshipmen morally, mentally and physically and to imbue them with the highest ideals of duty, honor and loyalty in order to graduate leaders who are dedicated to a career of naval service and have potential for future development in mind and character to assume the highest responsibilities of command, citizenship and government.â&amp;#x20AC;? We need some of those United States Naval Academy graduates to run for local and national political offices in 2018 and 2020! We need more morally and mentally developed candidates who possess the highest ideals to assume the responsibilities of running our nation ~ but I digress. Our neighbors, Paul and Susan Haddaway, enjoy taking local day trips as much as we do. We often share our stories of adventure during our monthly dinners together. The fou r of u s love Ha r r i sonâ&amp;#x20AC;&amp;#x2122;s Friday-night oyster buffet. After a cup of oyster stew and a sip of beer,

and just before filling our plates at the buffet, the stories begin. A few months ago, Paul and Susan raved about a recent trip to the United States Naval Academy in Annapolis. Embarrassing but true, neither John nor I had ever toured the Academy, even though we grew up in Severna Park, and John had sailed the Severn. We had visited Annapolis on many, many occasions, but just had never taken the tour of the Academy grounds. This was an oversight that we soon corrected. T he US N A w e b s ite pr o v ide s adequate information on parking near entrance gates and identifica-