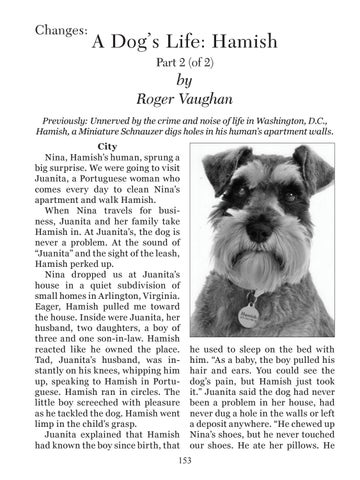 by Roger Vaughan Previously: Unnerved by the crime and noise of life in Washington, D.C., Hamish, a Miniature Schnauzer digs holes in his human’s apartment walls. City Nina, Hamish’s human, sprung a big surprise. We were going to visit Juanita, a Portuguese woman who comes every day to clean Nina’s apartment and walk Hamish. When Nina travels for business, Juanita and her family take Hamish in. At Juanita’s, the dog is never a problem. At the sound of “Juanita” and the sight of the leash, Hamish perked up. Nina dropped us at Juanita’s house in a quiet subdivision of small homes in Arlington, Virginia. Eager, Hamish pulled me toward the house. Inside were Juanita, her husband, two daughters, a boy of three and one son-in-law. Hamish reacted like he owned the place. Tad, Juanita’s husband, was instantly on his knees, whipping him up, speaking to Hamish in Portuguese. Hamish ran in circles. The little boy screeched with pleasure as he tackled the dog. Hamish went limp in the child’s grasp. Juanita explained that Hamish had known the boy since birth, that

he used to sleep on the bed with him. “As a baby, the boy pulled his hair and ears. You could see the dog’s pain, but Hamish just took it.” Juanita said the dog had never been a problem in her house, had never dug a hole in the walls or left a deposit anywhere. “He chewed up Nina’s shoes, but he never touched our shoes. He ate her pillows. He