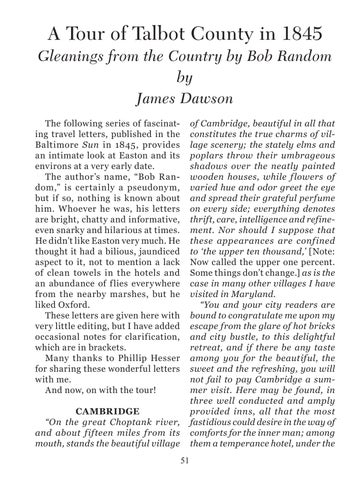 A Tour of Talbot County in 1845 Gleanings from the Country by Bob Random by James Dawson of Cambridge, beautiful in all that constitutes the true charms of village scenery; the stately elms and poplars throw their umbrageous shadows over the neatly painted wooden houses, while f lowers of varied hue and odor greet the eye and spread their grateful perfume on every side; everything denotes thrift, care, intelligence and refinement. Nor should I suppose that these appearances are conf ined to ‘the upper ten thousand,’ [Note: Now called the upper one percent. Some things don’t change.] as is the case in many other villages I have visited in Maryland. “You and your city readers are bound to congratulate me upon my escape from the glare of hot bricks and city bustle, to this delightful retreat, and if there be any taste among you for the beautiful, the sweet and the refreshing, you will not fail to pay Cambridge a summer visit. Here may be found, in three well conducted and amply provided inns, all that the most fastidious could desire in the way of comforts for the inner man; among them a temperance hotel, under the

The following series of fascinating travel letters, published in the Baltimore Sun in 1845, provides an intimate look at Easton and its environs at a very early date. The author’s name, “Bob Random,” is certainly a pseudonym, but if so, nothing is known about him. Whoever he was, his letters are bright, chatty and informative, even snarky and hilarious at times. He didn’t like Easton very much. He thought it had a bilious, jaundiced aspect to it, not to mention a lack of clean towels in the hotels and an abundance of f lies everywhere from the nearby marshes, but he liked Oxford. These letters are given here with very little editing, but I have added occasional notes for clarification, which are in brackets. Many thanks to Phillip Hesser for sharing these wonderful letters with me. And now, on with the tour! CAMBRIDGE “On the great Choptank river, and about fifteen miles from its mouth, stands the beautiful village 51