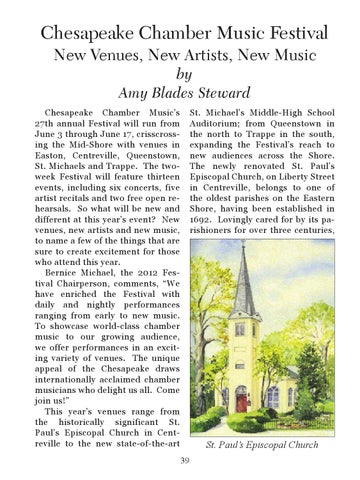 Chesapeake Chamber Music’s 27th annual Festival will run from June 3 through June 17, crisscrossing the Mid-Shore with venues in Easton, Centreville, Queenstown, St. Michaels and Trappe. The twoweek Festival will feature thirteen events, including six concerts, five artist recitals and two free open rehearsals. So what will be new and different at this year’s event? New venues, new artists and new music, to name a few of the things that are sure to create excitement for those who attend this year. Bernice Michael, the 2012 Festival Chairperson, comments, “We have enriched the Festival with daily and nightly performances ranging from early to new music. To showcase world-class chamber music to our growing audience, we offer performances in an exciting variety of venues. The unique appeal of the Chesapeake draws internationally acclaimed chamber musicians who delight us all. Come join us!” This year’s venues range from the historically significant St. Paul’s Episcopal Church in Centreville to the new state-of-the-art

St. Michael’s Middle-High School Auditorium; from Queenstown in the north to Trappe in the south, expanding the Festival’s reach to new audiences across the Shore. The newly renovated St. Paul’s Episcopal Church, on Liberty Street in Centreville, belongs to one of the oldest parishes on the Eastern Shore, having been established in 1692. Lovingly cared for by its parishioners for over three centuries,