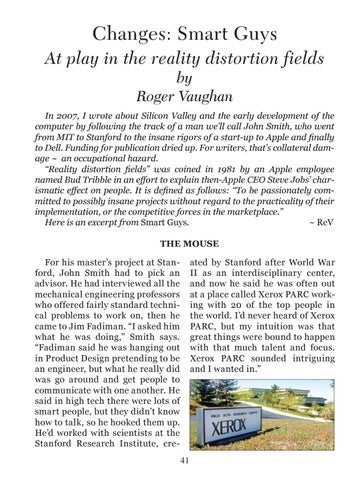 Changes: Smart Guys At play in the reality distortion fields by Roger Vaughan

In 2007, I wrote about Silicon Valley and the early development of the computer by following the track of a man we’ll call John Smith, who went from MIT to Stanford to the insane rigors of a start-up to Apple and finally to Dell. Funding for publication dried up. For writers, that’s collateral damage ~ an occupational hazard. “Reality distortion fields” was coined in 1981 by an Apple employee named Bud Tribble in an effort to explain then-Apple CEO Steve Jobs’ charismatic effect on people. It is defined as follows: “To be passionately committed to possibly insane projects without regard to the practicality of their implementation, or the competitive forces in the marketplace.” Here is an excerpt from Smart Guys. ~ ReV THE MOUSE ated by Stanford after World War II as an interdisciplinary center, and now he said he was often out at a place called Xerox PARC working with 20 of the top people in the world. I’d never heard of Xerox PARC, but my intuition was that great things were bound to happen with that much talent and focus. Xerox PARC sounded intriguing and I wanted in.”

For his master’s project at Stanford, John Smith had to pick an advisor. He had interviewed all the mechanical engineering professors who offered fairly standard technical problems to work on, then he came to Jim Fadiman. “I asked him what he was doing,” Smith says. “Fadiman said he was hanging out in Product Design pretending to be an engineer, but what he really did was go around and get people to communicate with one another. He said in high tech there were lots of smart people, but they didn’t know how to talk, so he hooked them up. He’d worked with scientists at the Stanford Research Institute, cre41