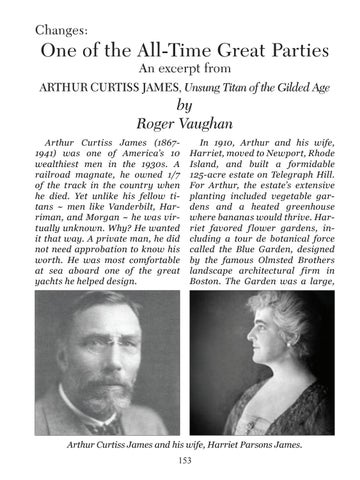 One of the All-Time Great Parties An excerpt from

by Roger Vaughan Arthur Curtiss James (18671941) was one of Americaâ&amp;#x20AC;&amp;#x2122;s 10 wealthiest men in the 1930s. A railroad magnate, he owned 1/7 of the track in the country when he died. Yet unlike his fellow titans ~ men like Vanderbilt, Harriman, and Morgan ~ he was virtually unknown. Why? He wanted it that way. A private man, he did not need approbation to know his worth. He was most comfortable at sea aboard one of the great yachts he helped design.

In 1910, Arthur and his wife, Harriet, moved to Newport, Rhode Island, and built a formidable 125-acre estate on Telegraph Hill. For Arthur, the estateâ&amp;#x20AC;&amp;#x2122;s extensive planting included vegetable gardens and a heated greenhouse where bananas would thrive. Harriet favored flower gardens, including a tour de botanical force called the Blue Garden, designed by the famous Olmsted Brothers landscape architectural firm in Boston. The Garden was a large,