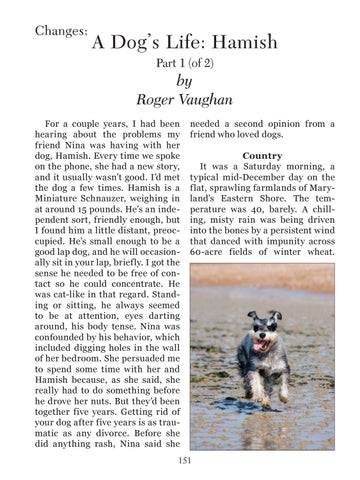 by Roger Vaughan For a couple years, I had been hearing about the problems my friend Nina was having with her dog, Hamish. Every time we spoke on the phone, she had a new story, and it usually wasn’t good. I’d met the dog a few times. Hamish is a Miniature Schnauzer, weighing in at around 15 pounds. He’s an independent sort, friendly enough, but I found him a little distant, preoccupied. He’s small enough to be a good lap dog, and he will occasionally sit in your lap, brief ly. I got the sense he needed to be free of contact so he could concentrate. He was cat-like in that regard. Standing or sitting, he always seemed to be at attention, eyes darting around, his body tense. Nina was confounded by his behavior, which included digging holes in the wall of her bedroom. She persuaded me to spend some time with her and Hamish because, as she said, she really had to do something before he drove her nuts. But they’d been together five years. Getting rid of your dog after five years is as traumatic as any divorce. Before she did anything rash, Nina said she

needed a second opinion from a friend who loved dogs. Country It was a Saturday morning, a typical mid-December day on the f lat, sprawling farmlands of Maryland’s Eastern Shore. The temperature was 40, barely. A chilling, misty rain was being driven into the bones by a persistent wind that danced with impunity across 60-acre fields of winter wheat.