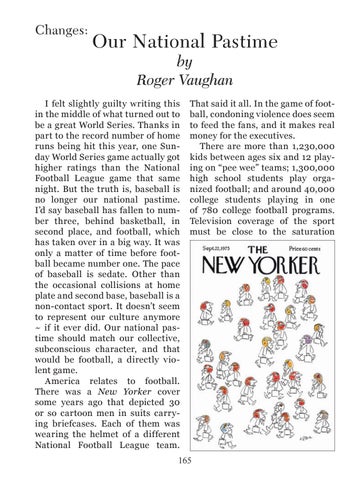 Our National Pastime by Roger Vaughan

I felt slightly guilty writing this in the middle of what turned out to be a great World Series. Thanks in part to the record number of home runs being hit this year, one Sunday World Series game actually got higher ratings than the National Football League game that same night. But the truth is, baseball is no longer our national pastime. I’d say baseball has fallen to number three, behind basketball, in second place, and football, which has taken over in a big way. It was only a matter of time before football became number one. The pace of baseball is sedate. Other than the occasional collisions at home plate and second base, baseball is a non-contact sport. It doesn’t seem to represent our culture anymore ~ if it ever did. Our national pastime should match our collective, subconscious character, and that would be football, a directly violent game. America relates to football. There was a New Yorker cover some years ago that depicted 30 or so cartoon men in suits carrying briefcases. Each of them was wearing the helmet of a different National Football League team.

That said it all. In the game of football, condoning violence does seem to feed the fans, and it makes real money for the executives. There are more than 1,230,000 kids between ages six and 12 playing on “pee wee” teams; 1,300,000 high school students play organized football; and around 40,000 college students playing in one of 780 college football programs. Television coverage of the sport must be close to the saturation