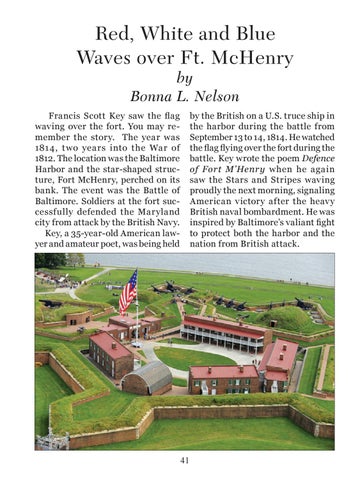 Francis Scott Key saw the flag waving over the fort. You may remember the story. The year was 1814, two years into the War of 1812. The location was the Baltimore Harbor and the star-shaped structure, Fort McHenry, perched on its bank. The event was the Battle of Baltimore. Soldiers at the fort successfully defended the Maryland city from attack by the British Navy. Key, a 35-year-old American lawyer and amateur poet, was being held

by the British on a U.S. truce ship in the harbor during the battle from September 13 to 14, 1814. He watched the flag flying over the fort during the battle. Key wrote the poem Defence of Fort Mâ&amp;#x20AC;&amp;#x2122;Henry when he again saw the Stars and Stripes waving proudly the next morning, signaling American victory after the heavy British naval bombardment. He was inspired by Baltimoreâ&amp;#x20AC;&amp;#x2122;s valiant fight to protect both the harbor and the nation from British attack.