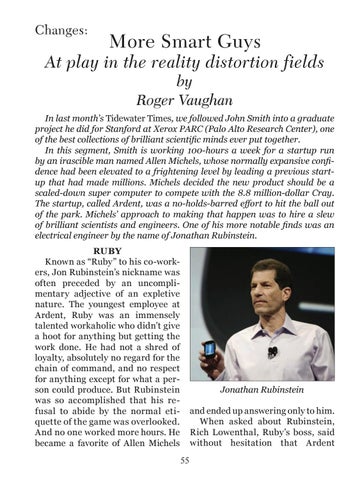 At play in the reality distortion fields by Roger Vaughan

In last month’s Tidewater Times, we followed John Smith into a graduate project he did for Stanford at Xerox PARC (Palo Alto Research Center), one of the best collections of brilliant scientific minds ever put together. In this segment, Smith is working 100-hours a week for a startup run by an irascible man named Allen Michels, whose normally expansive confidence had been elevated to a frightening level by leading a previous startup that had made millions. Michels decided the new product should be a scaled-down super computer to compete with the 8.8 million-dollar Cray. The startup, called Ardent, was a no-holds-barred effort to hit the ball out of the park. Michels’ approach to making that happen was to hire a slew of brilliant scientists and engineers. One of his more notable finds was an electrical engineer by the name of Jonathan Rubinstein. RUBY Known as “Ruby” to his co-workers, Jon Rubinstein’s nickname was often preceded by an uncomplimentary adjective of an expletive nature. The youngest employee at Ardent, Ruby was an immensely talented workaholic who didn’t give a hoot for anything but getting the work done. He had not a shred of loyalty, absolutely no regard for the chain of command, and no respect for anything except for what a person could produce. But Rubinstein was so accomplished that his refusal to abide by the normal etiquette of the game was overlooked. And no one worked more hours. He became a favorite of Allen Michels

Jonathan Rubinstein and ended up answering only to him. When asked about Rubinstein, Rich Lowenthal, Ruby’s boss, said without hesitation that Ardent 55