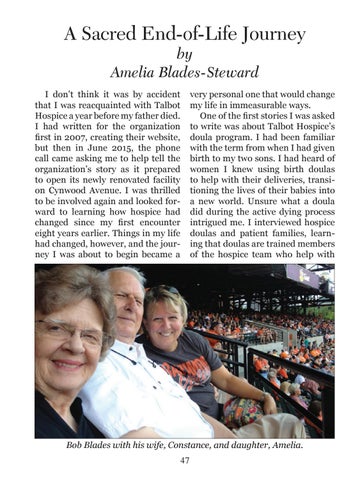 very personal one that would change my life in immeasurable ways. One of the first stories I was asked to write was about Talbot Hospiceâ&amp;#x20AC;&amp;#x2122;s doula program. I had been familiar with the term from when I had given birth to my two sons. I had heard of women I knew using birth doulas to help with their deliveries, transitioning the lives of their babies into a new world. Unsure what a doula did during the active dying process intrigued me. I interviewed hospice doulas and patient families, learning that doulas are trained members of the hospice team who help with

I donâ&amp;#x20AC;&amp;#x2122;t think it was by accident that I was reacquainted with Talbot Hospice a year before my father died. I had written for the organization first in 2007, creating their website, but then in June 2015, the phone call came asking me to help tell the organizationâ&amp;#x20AC;&amp;#x2122;s story as it prepared to open its newly renovated facility on Cynwood Avenue. I was thrilled to be involved again and looked forward to learning how hospice had changed since my first encounter eight years earlier. Things in my life had changed, however, and the journey I was about to begin became a

Bob Blades with his wife, Constance, and daughter, Amelia. 47