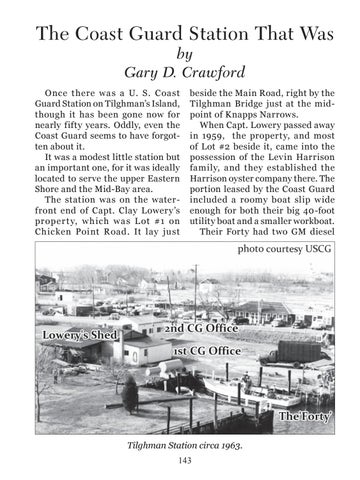 The Coast Guard Station That Was by Gary D. Crawford

Once there was a U. S. Coast Guard Station on Tilghmanâ&amp;#x20AC;&amp;#x2122;s Island, though it has been gone now for nearly fifty years. Oddly, even the Coast Guard seems to have forgotten about it. It was a modest little station but an important one, for it was ideally located to serve the upper Eastern Shore and the Mid-Bay area. The station was on the waterfront end of Capt. Clay Loweryâ&amp;#x20AC;&amp;#x2122;s proper t y, wh ich wa s L ot #1 on Chicken Point Road. It lay just

beside the Main Road, right by the Tilghman Bridge just at the midpoint of Knapps Narrows. When Capt. Lowery passed away in 1959, the property, and most of Lot #2 beside it, came into the possession of the Levin Harrison family, and they established the Harrison oyster company there. The portion leased by the Coast Guard included a roomy boat slip wide enough for both their big 40-foot utility boat and a smaller workboat. Their Forty had two GM diesel