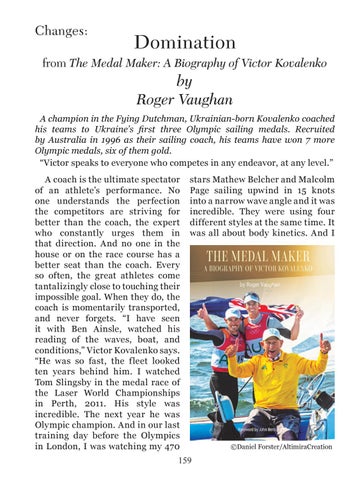 from The Medal Maker: A Biography of Victor Kovalenko

by Roger Vaughan A champion in the Fying Dutchman, Ukrainian-born Kovalenko coached his teams to Ukraine’s first three Olympic sailing medals. Recruited by Australia in 1996 as their sailing coach, his teams have won 7 more Olympic medals, six of them gold. “Victor speaks to everyone who competes in any endeavor, at any level.” A coach is the ultimate spectator of an athlete’s performance. No one understands the perfection the competitors are striving for better than the coach, the expert who constantly urges them in that direction. And no one in the house or on the race course has a better seat than the coach. Every so often, the great athletes come tantalizingly close to touching their impossible goal. When they do, the coach is momentarily transported, and never forgets. “I have seen it with Ben Ainsle, watched his reading of the waves, boat, and conditions,” Victor Kovalenko says. “He was so fast, the f leet looked ten years behind him. I watched Tom Slingsby in the medal race of the Laser World Championships in Perth, 2011. His style was incredible. The next year he was Olympic champion. And in our last training day before the Olympics in London, I was watching my 470

stars Mathew Belcher and Malcolm Page sailing upwind in 15 knots into a narrow wave angle and it was incredible. They were using four different styles at the same time. It was all about body kinetics. And I