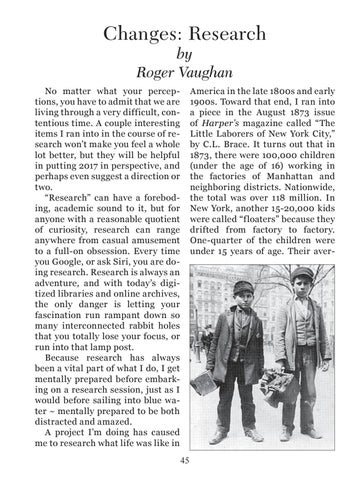 No matter what your perceptions, you have to admit that we are living through a very difficult, contentious time. A couple interesting items I ran into in the course of research won’t make you feel a whole lot better, but they will be helpful in putting 2017 in perspective, and perhaps even suggest a direction or two. “Research” can have a foreboding, academic sound to it, but for anyone with a reasonable quotient of curiosity, research can range anywhere from casual amusement to a full-on obsession. Every time you Google, or ask Siri, you are doing research. Research is always an adventure, and with today’s digitized libraries and online archives, the only danger is letting your fascination run rampant down so many interconnected rabbit holes that you totally lose your focus, or run into that lamp post. Because research has always been a vital part of what I do, I get mentally prepared before embarking on a research session, just as I would before sailing into blue water ~ mentally prepared to be both distracted and amazed. A project I’m doing has caused me to research what life was like in

America in the late 1800s and early 1900s. Toward that end, I ran into a piece in the August 1873 issue of Harper’s magazine called “The Little Laborers of New York City,” by C.L. Brace. It turns out that in 1873, there were 100,000 children (under the age of 16) working in the factories of Manhattan and neighboring districts. Nationwide, the total was over 118 million. In New York, another 15-20,000 kids were called “f loaters” because they drifted from factory to factory. One-quarter of the children were under 15 years of age. Their aver-