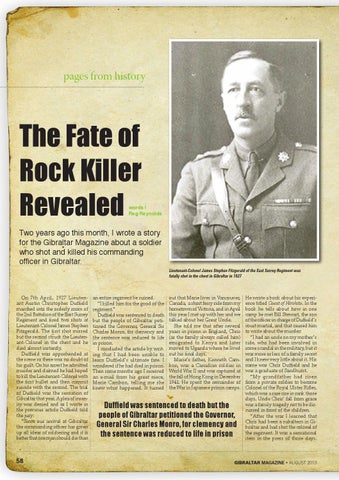 The Fate of Rock Killer Revealed

Two years ago this month, I wrote a story for the Gibraltar Magazine about a soldier who shot and killed his commanding officer in Gibraltar. Lieutenant-Colonel James Stephen Fitzgerald of the East Surrey Regiment was fatally shot in the chest in Gibraltar in 1927

On 7th April, 1927 Lieutenant Austin Christopher Duffield marched into the orderly room of the 2nd Battalion of the East Surrey Regiment and fired two shots at Lieutenant-Colonel James Stephen Fitzgerald. The first shot missed but the second struck the Lieutenant-Colonel in the chest and he died almost instantly. Duffield was apprehended at the scene so there was no doubt of his guilt. On his arrest he admitted murder and claimed he had hoped to kill the Lieutenant-Colonel with the first bullet and then commit suicide with the second. The trial of Duffield was the sensation of Gibraltar that year. A plea of insanity was denied and as I wrote in the previous article Duffield told the jury: “Since our arrival at Gibraltar the commanding officer has given up all ideas of soldiering and it is better that one man should die than

an entire regiment be ruined. “I killed him for the good of the regiment.” Duffield was sentenced to death but the people of Gibraltar petitioned the Governor, General Sir Charles Monro, for clemency and the sentence was reduced to life in prison. I concluded the article by writing that I had been unable to learn Duffield’s ultimate fate. I wondered if he had died in prison. Then some months ago I received an e-mail from his great niece, Marie Cambon, telling me she knew what happened. It turned

out that Marie lives in Vancouver, Canada, a short ferry ride from my hometown of Victoria, and in April this year I met up with her and we talked about her Great Uncle. She told me that after several years in prison in England, Chris (as the family always called him) emigrated to Kenya and later moved to Uganda where he lived out his final days. Marie’s father, Kenneth Cambon, was a Canadian soldier in World War II and was captured at the fall of Hong Kong in December 1941. He spent the remainder of the War in Japanese prison camps.

Duffield was sentenced to death but the people of Gibraltar petitioned the Governor, General Sir Charles Monro, for clemency and the sentence was reduced to life in prison

He wrote a book about his experience titled Guest of Hirohito. In the book he tells about how in one camp he met Bill Stewart, the son of the officer in charge of Duffield’s court martial, and that caused him to write about the murder: “I had an uncle on my mother’s side, who had been involved in some scandal in the military, but it was more or less of a family secret and I knew very little about it. His name was Chris Duffield and he was a graduate of Sandhurst. “My grandfather had risen from a private soldier to become Colonel of the Royal Ulster Rifles, which was a rare rise in rank those days. Uncle Chris’ fall from grace was a family tragedy not to be discussed in front of the children. “After the war I learned that Chris had been a subaltern in Gibraltar and had shot the colonel of the regiment. It was a sensational item in the press of those days. 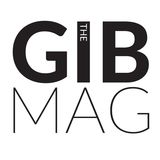